Break down of joint family system is also one of the reasons for sacred grove being in peril, says state Assembly panel report 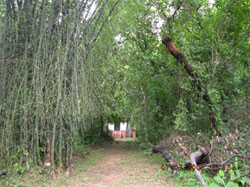 Rampant construction and human activities have spelt doom for Kerala’s sacred groves, a recent report tabled in the state Assembly said. Over the past six decades, Kerala has witnessed a drastic reduction in the number of its groves. While the state boasted of more than 10,000 groves at the time of its formation in 1956, only around 1,200 exist now, and among these many are under threat, the report prepared by the State Assembly Committee on Forest and Environment, chaired by forest minister Thiruvanchoor Radhakrishnan, reads.

Sacred groves, also called Kavu in Malayalam language, are rich abodes of biodiversity. They are often seen on the premises of Hindu ancestral homes (tharavaadu) in the villages.

It was a common practice among the people to assign a portion of the land on which they built house to serpent god Naga or goddess Durga. Felling of trees or even removing a twig from these lands were considered taboo. The groves were looked after and maintained by joint families.

Establishment of sacred groves was also seen as traditional efforts by the villages to conserve biodiversity and water resources. These groves had perennial water supply and thus supported human habitation. They also served as places for worshipping nature.

According to the state forest department, sacred groves are as rich in biodiversity as the evergreen forests of the Western Ghats. The size of a grove varies from 0.004 to 1 hectare. The vegetation in undisturbed groves is often luxuriant with multi-layered canopies, shrubs, lianas and herbs. The ground laden with humus is full of ferns and undergrowth. A majority of the groves occur in the northern region of the state.

According to the report, the groves are home to rare flora and fauna, including endangered species. As many as 475 species of birds, 100 species of mammals, 156 species of reptiles, 91 species of amphibians, 196 species of fish and 150 varieties of butterflies abound in the groves.

Apart from this, indicriminate grazing of cattle, felling of trees for firewood, encroachment by people and uprooting of old trees in natural calamities  have contributed to the destruction of sacred groves.

According to the report, the coastal district of Alappuzha has the highest number of groves while mountainous districts like Idukki and Wayanad have the lowest number. Iringorkavu, spread over a hectare in Perumbavur in Ernakulam district, is the largest grove in the state, the report says.

Preservation of sacred groves is important in an era of dwindling forest cover, water shortage and climate change, the report says. In this regard, concerted efforts should be made by the forest department and the State Biodiversity Board to maintain the groves.

The government should encourage the grove owners to maintain them by giving financial incentives and awards. Programmes to make people aware about the importance of groves should also be held. Felling of trees and poaching of birds should be banned in the groves, the report reads. Rare species of trees should be preserved in seed banks to ensure their availability.

The state has spent about Rs 88 lakh since 2011-12 to promote the conservation of groves. In a bid to involve students, 240 biodiversity clubs have been formed in various higher secondary schools and colleges. The number of these clubs will be increased to 500 by the end of this year, the report reads. The government is also trying to create new groves in different areas.