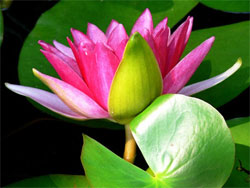 In Buddhist and Hindu scriptures, the lotus flower, which blooms in the mire where no other plant can survive, serves an interesting allegorical device. The resilience of this aquatic plant has served as inspiration to many a poet and philosopher through the ages. How does this aquatic plant survive in adverse environment?

In a bid to understand the secret of the lotus’ hardy temperament, a group of 70 scientists from the US, Australia, Japan and China conducted a study on the genome of the sacred lotus, Nelumbo nucifera, one of the first aquatic plants to have its genome sequenced.

A press note from University of California, Los Angeles (UCLA) quotes Jane Shen-Miller, senior scientist, Center for the Study of Evolution and the Origin of Life (CSEOL) at UCLA, as saying that the lotus ages over a period of 1,000 years, and can even survive freezing weather. “Its genetic makeup can combat stress. Most crops don't have a very long shelf life. But starches and proteins in lotus seeds remain palatable and actively promote seed germination, even after centuries of ageing,” says Miller in the press release.

About 23 years ago, Miller and a team of researchers from CSEOL had recovered lotus seeds that were 1,300 years old and still viable from a lake bed in Liaoning province of North Eastern China. In 1996, Miller once again followed the trail and recovered seeds which were 400 to 500 years old from the lake bed. In a startling discovery, 80 percent of these seeds were viable and could be germinated, indicating that the “sacred lotus” plant had a unique genetic system.

This discovery led to the study titled Genome of the long-living sacred lotus, that was published on May 10 this year in the journal, Genome Biology. Its findings give a big boost to scientists studying the process of ageing in plants and animals.

According to a UCLA release, these researchers are now studying how the lotus repair mechanism works and its possible implications for human health. The study involves a three-step process.

“Knowing the genome sequence was step one. Step two would be identifying which of these genes contributes to longevity and repairing genetic damage. Step three would be potential applications for human health, if we find and characterise those genes. The genome sequence will aid in future analysis,” says Crysten Blaby-Haas, a UCLA post-doctoral scholar and co-author of the research.

The research also shows that genetic endowment of the lotus plant can help it produce a protein which can metabolize metals to a great extent. This is not the least of its unique survival skills. Its leaves repel grime and water, its flowers generate heat to attract pollinators, and the coating of lotus fruit is covered with antibiotics and wax that ensure the viability of the seed it contains.

“Lotus' exceptional water repellency, known as the lotus effect, is due to the nanoscopic closely-packed protuberances of its self-cleaning leaf surface, which have been adapted for the manufacture of a self-cleaning industrial paint, Lotusan,” states the study published on May 10.

The lotus is also among three plants on the planet that can regulate their own temperature  and have the ability to produce heat through the process of thermo-regulation. The other two plants are meadow or skunk cabbage and a philodendron known as elephant ear.