Sadhus and farmers march to Delhi to liberate Yamuna from pollution

Yamuna Muktikaran Padayatra protests waste water discharge into the river from Delhi; police prevent them from proceeding to Jantar Mantar

Holy men gathered for Kumbh festivities in Allahabad last month had expressed grave concern over pollution in the Ganga and the Yamuna. Some of them living in the holy cities of Mathura and Vrindavan have now marched to Delhi along with thousands of farmers and others living in towns and villages along the river, demanding that Delhi clean up its act. Those taking part in the Yamuna Muktikaran Padayatra are currently camped at the outskirts of Delhi. 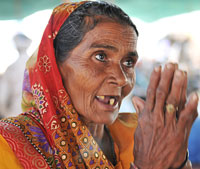 Anguri Bai has walked for more than 150 kilometre in the past 10 days. The blisters on her feet have not dampened her spirits to see a clean Yamuna in her village Barsana near Mathura. “We have come here to get Yamuna liberated. All the river water that comes from the mountains is stopped before Delhi. What we are getting in our villages is the dirty water of Delhi nullahs. I am not going to go back unless clean water is released in the river,” she said.

The march that started from Mathura on March 1, reached Delhi on March 12. While the organisers had planned to hold a protest rally at Jantar Mantar, the procession was stopped at Ali Gaon in Badarpur by the Delhi Police. “There are more than 30,000 people in the rally. It seems the government felt threatened and forcefully stopped us outside Delhi,” said one of the organisers.

The organisers have made two demands to the government. One, enough water should be released in the Yamuna from the Hathinikund barrage in Haryana; two, no waste water should be discharged into the Yamuna. “Uttar Pradesh (UP) has the longest stretch of the Yamuna flowing through it, but most of its water is diverted for irrigation to Himachal Pradesh and Haryana at the Hathinikund barrage.

Just after the barrage there is a dry patch. Whatever water comes from the catchment area further down is stopped by Delhi. From there, what flows towards the areas in UP downstream is all the sewage and effluents. We are not going to accept it anymore,” said Mahesh Singh, one of the members of the organising team. 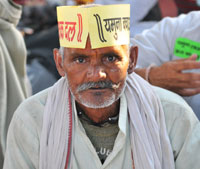 The rally seems to have gathered momentum due to the religious sentiments attached to Yamuna and the holy cities of Mathura, Vrindavan and Allahabad. “We worship Thakurji (Lord Krishna) with Yamuna water. Our day starts with worshipping the Yamuna. We cannot let the drains of Delhi flow into it.

It is the question of our faith and pride,” said Lekhraj Singh who came from Ranvari village near Vrindavan. The rally is organised by Yamuna Rakshak Dal and Pushti Rakshak Dal (both organisations are of sadhus working for a clean Yamuna) and Bhartiya Kisan Union. Delegates of these organisations also met the representatives from ministries of environment and forests and water resources on March 12.