The draft bill promises to be transparent. Yet, the Food Authority has a lot of discretion in this respect 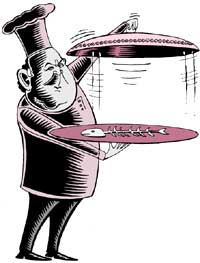 On April 5, 2005 a group of ministers (gom), headed by the Union agriculture minister Sharad Pawar, cleared the draft of the Integrated Food Bill. The draft bill will now go to the union law ministry and then to the union cabinet for final approval. The Union ministry of food processing industry (mpfi), the nodal body for the new law, is expected to introduce it in the second half of the session of Parliament which resumes April 18.

Known as The Food Safety and Standards Bill, 2005, it aims to "to bring about a single statute relating to food and to lay down science-based standards for articles of food and regulate their manufacture, import, export, storage, distribution and sale, to ensure availability of safe and wholesome food for human consumption (including other matters relating thereto) and to establish in that behalf Food Safety and Standards Authority of India and for matters connected therewith or incidental thereto."

Terming it a major breakthrough, Subodh Kant Sahai, minister of state, mpfi, said, "The idea is that there will there will be one law governing all processed food issues." The draft bill when approved will lead to eight existing laws being repealed and will modify about eight others. Regulations likely to be repealed include the Prevention of Food Adulteration Act (pfa)1954; the Fruit Products Order, 1955; the Milk and Milk Products Order, 1992; the Meat Food Products Order, 1973; the Vegetable Oil Products (Control) Order, 1947; the Edible Oils Packaging (Regulation) Order, 1998; the Solvent Extracted Oil, De-oiled Meal and Edible Flour (Control) Order, 1967; and any other orders issued under the Essential Commodities Act, 1955 relating to food.

Originally the bill, open for public comment till February 15, also intended to repeal the Infant Milk Substitutes, Feeding Bottles and Infant Foods (Regulation of Production, Supply and Distribution) Act, 1992. But this raised both official and civil society hackles. Arjun Singh, minister for human resource development, wrote to mpfi against repealing the Act; many organisations also protested. gom finally decided to only amend the Act.

A crucial flaw is the constitution of the statutory authority to be formed under the bill. Under the pfa , the Central Committee for Food Standards (ccfs) is the designated authority. It is headed by the director general of health services and includes as members the director of Central Food Laboratory, two experts nominated by central government, representatives from relevant ministries, state governments, five people nominated to represent consumer interests, a medical expert nominated by the Indian Council of Medical Research and a representative from the Indian Standards Institution (Bureau of Indian Standards). Overall: all interests are adequately represented, including -- this is a legal requirement -- from civil society consumer bodies responsible for safeguarding consumer interests.


In contrast, the proposed Food Safety and Standards Authority (fssa), the statuatory body to perform functions assigned under the new act, is lopsided in favour of bureaucrats. It will have 11 members plus a chairperson. Six will be joint secretaries from various ministries. Others include two representatives from state governments, one eminent food technologist or scientist, and a representative each from consumer groups and the food industry. It is an apex body. It will administer a large number of currently existing legislations dealing with highly technical issues related to overall food safety, but there is no representation from food testing laboratories, the medical profession, the Indian Standards Institution, independent experts and civil society bodies.

Moreover, ccfs is headed by the director general of health services. But for fssa, the law leaves the option open of appointing the chair either from "persons of eminence in the field of food science or from amongst the persons from administration who have been associated with the subject and is either holding or has held the position of not below the rank of Secretary". Surely a step backwards?


Of course, the draft bill does improve over the existing pfa. The issue of presence of pesticides residues, for instance, finds mention. In the draft bill, article 20, "General provisions as to articles of food", deals with "Insecticides, pesticides and veterinary drug residues". "No article of food shall contain insecticides, pesticides, veterinary drugs residues in excess of the tolerance limit prescribed under this Act and the rules and regulations made there under", reads the article. It is a step forward. But a small one, for the issue of Acceptable Daily Intake (adi) is not dealt with. The government, thus, is missing an opportunity to include health-based criteria within law. By making adi the basis of regulation governing food safety, the government could have legalised the concept, thus giving a boost to overall food safety.


There are other improvements, such as a clause on public disclosure. States subsection 4 of article 14 on the functions of fssa:

The Food Authority shall make it public without undue delay

• the results of its scientific studies; and

• the annual report of its activities.

Considering very little information on various aspects of food safety is currently available in the public domain, this is a welcome legislative step.

But the very next subsection gives the Food Authority a lot of discretionary powers. Subsection 4 reads: "The Food Authority shall not disclose or cause to be disclosed to third parties confidential information that it receives for which confidential treatment has been requested and has been acceded, except for information which must be made public if circumstances so require, in order to protect public health."

Another major improvement is the Section 17 (f) in the "general principals of food safety". In India, lack of scientific certainty is often used, by regulators as well as industry, as an excuse to not undertake any action or remedial steps. Now, Section 17 (f) states: "where, in any specific circumstance, on the basis of assessment of available information, the possibility of harmful effects on health is identified but scientific uncertainty persists, provisional risk management measures necessary to ensure the high level of health protection may be adopted, pending further scientific information for a more comprehensive risk assessment." If supported by adequate implementation mechanisms, this clause can be a good legal aid to affected communities.


Similarly article 25 on "prohibition on placing unsafe food in market" is a big step forward. The section reads:

In determining whether any food is injurious to health, regard shall be had

• not only to the probable immediate or short-term or long-term effects of that food on the health of a person consuming it, but also on subsequent generations;

• to the probable cumulative toxic effects;

Supported by well-drafted rules the clause will have a huge impact on the overall issue of regulating food safety.


In legislation of this nature, the rules reveal the entire legal framework. But the rules for the draft bill have not yet been made public. Many aspects not dealt with in the draft bill, or merely touched upon, are often detailed out in the rules, as are the implementation mechanisms. Thus without them, the entire scope of the legislation will not be clear. By coming out with just the draft bill, the government has only done a partial job.