Safe in the fast lane 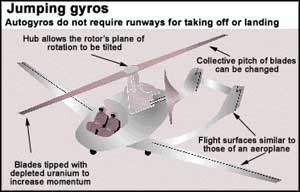 autogyros that had vanished from the scene after a brief period of popularity in 1930s, may soon stage a comeback. Autogyros are the fly machines that can carry up to five persons at a time. The gyroplanes -- as autogyros are called today -- are fitted with free-spinning rotors overhead that help in lifting the crafts. Propellers mounted on the back enable the autogyros to move in forward direction.

Two us -based companies, Groen Brothers Aviation, Salt Lake City, Utah, and CarterCopter, Wichita Falls, Texas, are separately developing the autogyros that could do everything a helicopter can do, except hover. They are using know how of helicopters and planes to make these hybrid machines (New Scientist , Vol 155, No 2089).

Some notable features of helicopters are that they can take off vertically, hover and land vertically. At the same time, there are some limitations too. The big and heavy engines of helicopters do not allow them to move very fast. Further, a helicopter requires too much time to be maintained.

It is mechanically more simple to build a light aircraft than a helicopter. Wings fitted in the aircraft provide lift, and a propeller the thrust. It can also fly faster than helicopters. However, light aircrafts always requires high speed to maintain its flight control. The reason is that the lift of the aircraft is generated by the wings, which depend on its speed. Another limitation of the light aircraft is that it can only take off and land from runways.

These problems do not arise with the gyroplanes. Jay Carter, president of CarterCopter, says that in a gyroplane, the rotor is actually tilted back slightly so that whenever it moves forward, air flows up and through. This flow of air causes the blades to autorotate. The rotor is tilted at an angle of 10 degrees, while the blades themselves are tilted about three degrees to their plane of rotation.

The lift generated by the blades in a gyroplane is similar to that of an aircraft's wing. Because of all these mechanical simplicities, gyroplanes are easier to maintain and cheaper to operate than helicopters. If the engine of a gyroplane fails, the free-spinning rotor still generates enough lift to help it land safely.

The best way to take off in a gyroplane is to speed along a runway. But the plane can also take off almost vertically. Jay Groen, chairperson of Groen Brothers, says the prototype gyroplane developed by the company, has shown potential to climb at least 17 metres in the first 90 metres of flight. It is enough to taking off from the tops of most buildings.

According to Groen, a three-seater gyroplane can cruise with a top speed of 260 km per hour at a maximum altitude of 5,800 metres. The successful flight tests of these flying machines have prompted the Shanghai Energy and Chemical Company to order 200 gyroplanes. These planes would be used for air taxi services between China's congested cities. Carter hopes that a slight modification can help the gyroplane to travel at 800 km per hour, and fly higher and climb more steeply than any helicopter or propeller-driven plane.

Both the companies are optimistic to considerably reduce the operating cost of the gyroplanes. Police forces in the us have shown interest in buying the gyroplanes as they cannot afford helicopters and want to cut the cost of air surveillance.