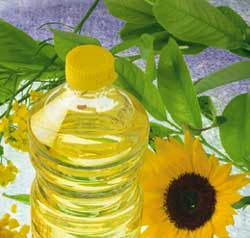 edibleoils may have a use outside the kitchen, too. A New Zealand scientist claims cooking oils like sunflower oil can replace the volatile, toxic solvents used to prepare antibiotics such as penicillin and several other industrially significant plant-based products.

Currently, penicillin is produced mainly by submerged aerobic fermentation using butyl acetate or kerosene as solvents. The method results in a 10-15 per cent loss of product. Besides, the use of butyl acetate makes the method costly. The recovery of the chemical is difficult because it is an energy-intensive multi-step process. Solvents such as toluene and butyl acetate are volatile and disperse into the atmosphere after production. "These solvent vapours are not only bad for the environment, but also pose occupational health and safety problems," says Monwar Hossain of the University of Auckland, who has developed a process that uses vegetable oils as solvents and the latest separation and reaction techniques.

Over the years, his team has identified several compounds that work well with different target substances. These compounds bind to the target substance. Subsequently, the material is separated from the feed solution using a special membrane. "Insertion of a hollow fibre membrane between the host solution and the solvent allows only the target substance to pass through but it slows down the process. To speed it up, we have added 'carrier' molecules to the solvent," says Hossain.

"The carrier molecule selectively and reversibly reacts with the solute, increasing both the speed of extraction and the selectivity towards the target substance. The result is that we can do this at a desired p h (measure of acidity/alkalinity), and so greatly reduce decomposition losses," he added.

China has shown keen interest in the new technology. Its Institute of Medicinal Biotechnology at the Academy of Biomedical Sciences has approached Hossain to work on a collaborative project to extract a new class of antibiotics, that can be taken up for production by China's fledgling biotechnology industry. An international pharmaceutical company has also expressed interest in the process.