Two safe chemicals, which curb mosquitoes’ ability to locate humans, have been identified 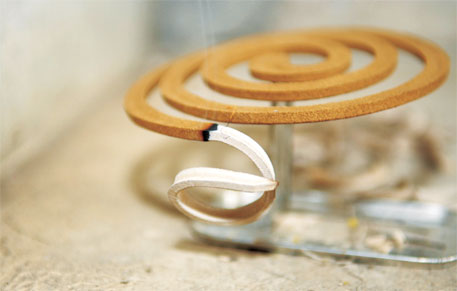 THOUGH common mosquito repellents offer protection from the parasite, they have side effects. A study carried out more than a decade ago in India by V P Sharma from the Indian Council of Medical Research found that 11.8 per cent people using repellents complained of health problems, like hyper-excitation of the nervous systems,Ã”Ã‡Ãªand some even required medical treatment. The researchersÃ”Ã‡Ãªsaid that although symptoms disappear in a short time after the use ofÃ”Ã‡Ãªrepellents is discontinued, those who continueÃ”Ã‡Ãªusing these repellentsÃ”Ã‡Ãªare susceptible to neurotoxic and immunotoxic hazards.

Researchers, therefore, are trying to develop a repellent that does not have serious side effects. One such study is being done at the University of California, Riverside, US, under Anandsankar Ray, a professor at the university.

Mosquitoes are known to be attracted to carbon dioxide (CO2), exhaled during respiration. Ray and his colleagues have now discovered that the receptors in mosquitoes responsible for sensing CO2 also detect odours associated with the human skin. Located on the maxillary palp (a pair of antenna-like structures arising from mosquito mouthparts), these dual receptors are called cpA. For years scientists had been trying to find such detectors of human skin on the antennae of mosquitoes without any success.

Next, the researchers wanted to find safe chemical compounds that inhibit or activate the cpA receptors because such compounds could have a huge role in controlling mosquitoes. For this a computer programme that could “look at the structures of the known activators and inhibitors that bind to the CO2 receptor and find structural features that are shared amongst them” was designed, explained Ray.

“Designing the computer programme took several months, but after that was done, actual testing took just one day,” Ray said. The programme scanned half a million compounds for the presence of these shared features. It threw up some interesting results. Most compounds that could be labelled as inhibitors or activators of cpA fell in the GRAS category of compounds. As explained on the USÃ”Ã‡Ãª Food and Drug Administration (FDA) website, GRAS stands for “generally regarded as safe”. Such compounds are considered safe enough to be added to food, says FDA.

Two compounds were selected for further testing—ethyl pyruvateÃ”Ã‡Ãª(a cpA inhibitor having a fruity smell) and cyclopentanone (a cpA activator with a minty smell). Presence of ethyl pyruvate was found to greatly inhibit attraction of mosquitoes to humans. Cyclopentanone, on the other hand, was found to attract mosquitoes to itself, making it a perfect mosquito trap.

Ray says, “The next step will be to test more of the predicted activators and inhibitors to find even better chemicals. Methods for delivering these odours near humans will also need to be designed. We do not know what shape it will take—spray on clothes, wristbands, stickers, patches, or perfume dispensers.”

R C Dhiman, senior scientist at the National Institute of Malaria Research, Delhi, says, “This a good piece of work and the results appear promising.” Tridibes Adak, another senior scientist with the institute, says the results are encouraging and thorough. He adds that he hasÃ”Ã‡Ãªtested many repellents and traps that have failed to deliver concrete resultsÃ”Ã‡Ãªand, therefore, is eager to see how this one fares.

Screening of local plants for Their repellent activity against mosquitoes (Diptera: Culicidae)