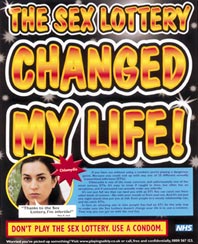 Scratch cards showing what lies beneath a man's underwear may seem perverse and a fillip to people's pornographic instincts, but the uk government is using precisely this kink to promote safe sex.

The Department of Health's Sex Lottery ad campaign, which informs people about 25 sexually transmitted infections (sti), uses the language and innuendo of men's magazines. The pitch was deliberate. The campaign, which started in 2002, wanted to tell the high-risk group of 18-30-year old heterosexuals: it could be you.

"The campaign... uses humour to engage and deliver the hard hitting facts in a way which involves, rather than alienates," says Clare Spelman, account manager for Delaney Lund Knox Warren & Partners (dlkw), which designed the campaign.

The campaign was done "to make people aware that the odds of catching something from unprotected sex are much shorter than you think," says Spelman.

Sex lottery scratch cards, the main tools of the campaign, were distributed in pubs and clubs. Washroom posters, beer mats, billboards and radio messages too emphasised the risk from stis. The department also set up a website and a helpline on information about the infections.

Calls to the helpline increased by 32 per cent and the website attracted 35,000 'unique visitors' each month during the campaign. Most calls were from 18 to 30 year-olds. uk seems to have got the campaign's message: "Don't play the sex lottery. Use a condom."