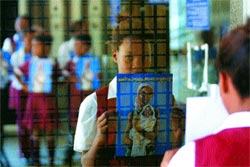 Campaigners against malaria in Africa contend that simple protective nets could save thousands of lives across the continent. Malaria causes at least a million deaths in Africa each year. The disease is estimated to kill an African child every 30 seconds. But less than three per cent of the children at risk are sheltered by insecticide-protected nets.

Ninety per cent of malarial deaths occur in the sub-Saharan region of Africa, one of the poorest areas in the world. To combat the scourge, humanitarian organisations such as Medecins Sans Frontieres (msf) have called for more effective combination drug therapies to be made widely available across the continent.

msf avers that newer treatments are required, as traditional anti-malarial drugs are failing because of growing resistance to them. The World Health Organisation (who) and the United Nations Children's Fund (unicef) say timely treatment of malaria, plus widespread use of nets could lower transmission of the disease by up to 60 per cent.