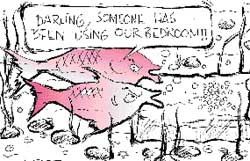 John Volpe is a research student at University of Victoria, Canada. He says the eggs laid by native Pacific salmon, which reproduce earlier in the year, may be disturbed if the escaped Atlantic salmon travel up rivers and attempt to spawn. Volpe is conducting experiments in artificial spawning streams to test this possibility.

Lee Alverson of Natural Resources Consultants, Seattle, helped the British Columbian government produce a report on the issue that was released in August 1997. The report recommended that fish farmers be required to take more stringent steps to prevent escapes. Alverson says that more than 15 per cent of the 5,000 spawning populations of British Columbia are already in danger of being wiped out due to extensive logging and human activity. Even a few dozen Atlantic salmon in a single river could have an important effect, he adds.

Atlantic and Pacific salmon are unlikely to interbreed and the number of escapees was reported to be small initially. But in 1994-95, fish farmers reported over 50,000 escaped Atlantic salmon. Andy Thomson, independent fisheries biologist in Nanaimo, British Columbia, tracks Atlantic salmon for the Canadian government. Thomson says that poor reporting means the true number of escapees is much higher. About 350,000 salmon escaped just south of the us border near Seattle in 1997 when a net cage broke while being towed to a new location. "We just do not know what the consequences of that would be," says Alverson. Research to monitor the environmental impact of escaping Pacific salmon should have begun years ago, says Volpe.