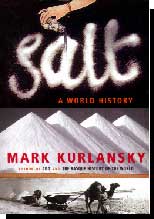 WE often take salt for granted. It's a common, inexpensive substance that seasons food. However, as Mark Kurlansky says in this book under review, the only rock we eat has shaped civilisation from the very beginning. Homer called it a divine substance. Plato thought it was specially dear to the gods. Salad is so named because the Romans liked to salt their vegetables. Salacious is from the Latin salax, meaning a man in love literally, 'in the salted state'.

Kurlansky's is several books in one a food history, a recipe book, a travelogue and a cultural history. Demand for salt established the earliest trade routes, across the remotest of deserts the city of Jericho was founded almost 10,000 years ago as a salt trading centre.Salt has provoked and financed some wars, and been a strategic element in others, such as the American Revolution and the Civil War.

Salt taxes secured empires across Europe and Asia and have also inspired revolt Gandhi's Dandi March of 1930 among them. Medieval Venetians produced salt in Chioggia, and raided nearby Comacchio in the 10th century to eliminate competition from the saltworks there. Venice increased its power in the 13th century by subsidising salt import and manipulating production throughout the Mediterranean to control salt prices.

The history of foods like cheese, sauerkraut and olives have been moulded by salt. Kurlansky's stories have colourful characters Li Bing, the Chinese bureaucrat who built the world's first dam in 250 bc, Pattillo Higgins and Anthony Lucas who, ignoring the advice of geologists, drilled an east Texas salt dome in 1901 and discovered an oil reserve so large it gave birth to the age of petroleum.

The book takes us to sinking salt towns of Cheshire in England, the celebrated salt mine on Avery Island in Louisiana, remote Caribbean islands and rural Sichaun province, where the last home-made soya sauce is made.

The book's scope is mind boggling, but Kurlansky's clear prose keeps one rivetted.

He does sometimes overstate his case somewhat. For example, when discussing the events leading to the French Revolution, he focuses almost exclusively on the unpopular gabelles, salt taxes. If you are a food enthusiast or a history buff you are to likely savour Salt A World History.