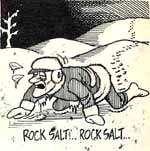 In much of the US east coast north of Washington, a salt shortage is compounding a wretched winter. Rock salt, which is dumped by the tonne on roads to prevent the formation of ice, is now in great demand. In Pennsylvania, for instance, 90 per cent of the salt ordered for the season has been consumed.

Richard Hanneman, president of the Salt Institute, an association of salt makers, says, "We have the salt supplies. But we cannot get them to the customers." The salt is usually delivered by barge and rail, but frozen rail switches and ice-choked rivers have slowed or stalled the shipments.