The consumption of salt is currently being blamed for several health problems like high blood pressure and heart ailments that follow. Even though salt is bad for human health, the same may not be the case for many species in the animal world, as has been demonstrated by the male Gluphisia moth 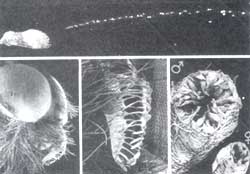 A SEEMINGLY nonsensical trait displayed by the moth is that it spends a few hours of its short lifespan guzzling down enormous quantities of water from the one end and throwing it out of the other with great force. According to scientists, this activity - puddling - is a life-saving mechanism by which the moths absorb salt from 'stands of water or moist soil' and preserve it for future use. Scott R Smedley and Thomas Eisner of Cornell University in Ithaca, New York, have interpreted their behaviour as a kind of 'courtship' ritual. These natural salt shakers pass on their ion cache to the females who in turn provide it to their young by salting the eggs (Science, Vol 270, No 5243).

Gluphisia moths feed on quaking aspen which is low in salt content and therefore, need to prospect for the same. Sitting by pool-sides, these moths ceaselessly puddle for 3-4 hours. Smedley compared the sodium content of the water in the pool to that released by the moth and found that despite the high speed at which the water was sucked and ejected, the sodium ion content was ultimately reduced. This proves that the salt gets sucked-in on its way out. Tests carried out on the tissues of moths which had puddled were contrasted with those of the moths which refrained from the activity. The results obtained from these tests also proved that salt intake was the main reason for puddling. And the amount of salt retained by the puddler was eight times more than that of a non-puddler.

The study also sought to calculate the absorption- capacity of the moth. Scientists found that the male moth could take in and squirt out 20 jets of water in a minute. The quantity of water thrown out is a seventh of the total body mass of the moth. Says Eisner, "the rhythm of the puddling is so fixed that we could photograph it by singing a song to the beat of the pulses and then press the shutter on one of the beats."

Departing from the physical appearance of the normal moths who have long proboscis, the Gluphisia moths have a short, curved beak opening into a wide oral cleft enabling the intake action. Interdigitating projections around the hole prevent the entry of sludge particles which may slow the guzzling process. The hind gut of the male is larger than the female's and packed with more absorbtive tissue which further helps in sodium absorption.

Half the absorbed salt is incorporated into the spermatophore con taining proteins, nutrients and sperms and presented to the female moth as a nuptial gift'. The female passes on the sodium to the eggs to ensure an adequate supply of the ions.

Other animals have been known to exhibit their love for salt. For instance, elephants dislodge and carry clay up to their mouths with the help of their trunks to lick the salt. The craving for salt is more intense among herbivores than carnivores as the latter meet the demand for salt by consuming the blood and other body fluids of their prey.

Medical research may reveal the ill-effects of salt, but the fact remains that it is indeed an important ingredient and the basic requirement of any living being. In fact if evolutionary biologists are to be believed, it was their exceptional ability to store salt which helped African slaves survive the strenous, hardship-ridden journey across the oceans to America by shielding their lives against hypertension.