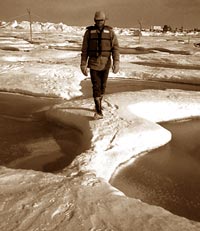 Antarctica has mostly cooled over the last 30 years. But this trend is likely to rapidly reverse, according to computer simulations of the us National Aeronautical and Space Administration (NASA). The study indicates that the South Polar region is expected to warm during the next 50 years.

At present, depleted ozone levels and climate change are contributing to the cooler South Pole temperatures. Both the low ozone levels in the stratosphere and increasing greenhouse gases promote a positive phase of a shifting atmospheric climate pattern in the Southern Hemisphere, called the Southern Annular Mode (SAM). A positive SAM isolates colder air in the interiors of Antarctica. But in the coming decades, ozone levels are expected to recover due to international treaties that banned ozone-depleting chemicals. NASA researchers found that the higher ozone levels might have a reverse impact on the SAM, promoting a warm and negative phase.