Sanitation survey has no winners

45 per cent Indian cities are in the red 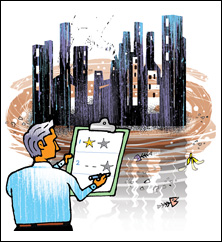 A survey by the Union Ministry of Urban Development to rate cities for their hygiene revealed what most people already know—urban areas across India are weighed down by their own waste. Not one of the 423 cities surveyed got the ‘healthy and clean’ tag. Even Chandigarh that got top rating for cleanliness has been categorized as ‘recovering but still diseased’. The ratings, based on the prevalence of open defecation, manual scavenging and the management of wastewater and solid waste, were made public on May 10.

“The purpose of this exercise is to recognize better performers as well as to encourage other cities to perform better,” said Jaipal Reddy, Union minister for urban development at the launch of the city rating results. Urban development secretary M Ramachandran stressed that cities should utilize the rankings as an opportunity to improve living conditions.

All the 423 cities, each with a population exceeding 100,000, were rated against a set of indicators. Three independent agencies were selected to carry out field surveys and consult state governments and urban local bodies. The year-long rating exercise placed cities in different categories, namely red, black, blue and green, with red cities—needing immediate remedial action—at the bottom of the list (see table). 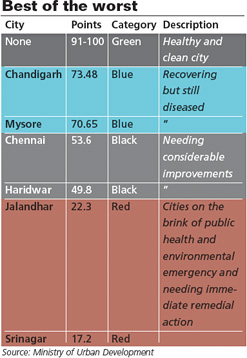 Nearly 45 per cent of the surveyed cities were placed in the red group, said Gautam Banerjee, coordinator of the ministry’s urban sanitation policy. Only two cities, including Chandigarh, were rated blue. As many as 228 cities got the black tag, indicating need for considerable improvement. More than 50 cities reported 90 per cent or above safe collection of human excreta. But wastewater treatment levels are abysmal; 380 cities collect and treat less than 40 per cent of the sewage they generate.

The majority of the cities in the western region (Rajasthan, Gujarat and Maharashtra) scored poorly, said Madhu Bharti, professor at the Centre for Environment Planning and Technology, a state university in Ahmedabad. She coordinated the survey for 81 cities in the region. The results were not well received by many city representatives.

“On the day the ratings were announced, aggressive city officers from the region claimed they should have scored higher,” said Bharti. But after day-long discussions the representatives understood the idea behind the exercise was to drive improvements. This exercise has set a national benchmark and serves as a reminder that we are a long way from achieving sanitation standards in our cities, she added.