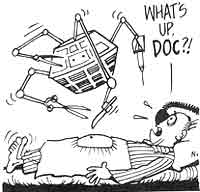 Two non-resident Indian scientists, Shibu Basuthakur and Supriya Roy, have proposed a project that will enable sick people in West Bengal to be examined by doctors in the US via satellite. The duo have presented a Rs 33-crore proposal to the West Bengal government to establish a healthcare network in the state, which will be linked by satellite to the Methodist Hospital in Houston.

At the heart of the project is a base-station facility, the Hub, to be built in Calcutta, which will house a high-tech diagnostic centre with facilities for instantaneous consultation with the Houston hospital. Peripheral healthcare centres in each district will be telelinked to the Hub.

Explains Basuthakur, "A video network will allow a doctor at one site to interact with a patient at another just as if they were in the same room." For example, he said, ophthalmologists at the Hub will use remote-controlled optics to examine a patient's retina in a peripheral facility. Similarly, dermatologists will use zoom cameras to minutely examine skin ailments. Besides, doctors in Houston will also be able to conduct long-distance cardiological and laryngoscopic examinations and even direct operations. Computer-controlled equipment will help assess the patient's progress.

Similar telemedicine bridges already link Houston with Moscow and Ankara. Basuthakur said West Bengal chief minister Jyoti Basu responded favourably to the project. The Calcutta Improvement Trust has promised a plot for the construction of the Hub, which is to be built by 1995-96.