Meteorologists can now use satellite pictures to keep track of hot spots in the Pacific. 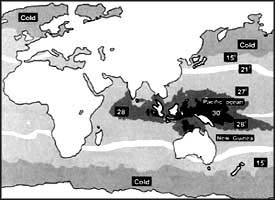 SCIENTISTS at the University of Delaware have produced an accurate satellite image of sea surface temperatures in the Pacific Ocean, enabling weather experts to track the deadly El Nino, the warm current in the Pacific which brings in its wake droughts to India, Africa and other parts of the world.

The new satellite image shows clearly that there is a mysterious pool of warm water near New Guinea whose temperatures run about 29.5OC -- about 2OC to 5OC above other equatorial waters.

According to scientists Xiao-Hai Yan and Victor Klemas of the University of Delaware and Dake Chen at the University Corporation for Atmospheric Research in Boulder, who have prepared the satellite image, sea surface temperatures can normally be measured by only taking ship-based observations in the oceans. Such observations are limited in time and space and, therefore, meteorologists find it difficult to keep a track of the warm water pool, its extent and how it is changing over time. But now Yan, Klemas and Chen have shown that it is possible to use data obtained by satellites over large areas and put it through appropriate computer models to get an accurate map of the sea surface temperature. The researchers are thrilled: "It is amazing to see how closely the remotely-sensed data can be related to the large-scale ocean dynamics and can be used in studies of the tropical ocean and the global atmosphere."

The western part of the Pacific Ocean around the equator is a vast warm water pool. There is a "turbulent heat exchange" between the ocean and the atmosphere in this region. Because of the "very large size of the warm pool region," the global atmosphere is extremely sensitive to the changes that take place in the sea surface temperature in the western Pacific. The satellite-based images of the type prepared by the scientists at the University of Delaware should help in increasing the understanding of the oceanic processes, how they affect atmospheric processes like the weather, and the global climate.