Save oceans from acidifying 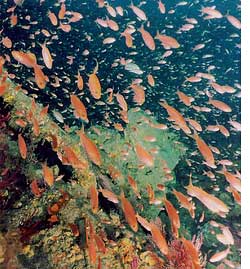 Fish can do it by producing and excreting carbonates

Until now scientists believed that the calcium carbonate (CaCO3), which makes seawater alkaline, came from the external skeletons of microscopic marine plankton. But these carbonates are not water-soluble and sink to deeper depths forming sediments which stay intact for millions of years. This led researchers from the universities of Exeter, Miami, Ottawa, British Columbia and East Anglia to investigate what makes the sea alkaline at shallower depths (500-1,000 m). They found fish responsible for producing three to 15 per cent of marine calcium carbonate.

For the study, published in the January 16 issue of Science, the researchers transferred the European flounder fish (Platichthys flesus) from freshwater to seawater. This fish can adapt to varying levels of salinity. Within three hours, X-rays showed accumulation of carbonate precipitates had begun. These were excreted as pellets covered in mucus. The subtropical Gulf toadfish (Opsanus beta) was similarly studied. To establish a link between temperature, body mass and the rate of carbonate excretion, the researchers studied various classes of fish based on their sizes and abundance in the oceans.

Planktons depend on calcium carbonate from seawater for their external shells, which are recycled into the sea after they die. Increasing global temperatures will affect the organisms adversely. But such conditions will be apt for fish to produce more carbonates, thus regulating the carbon cycle.