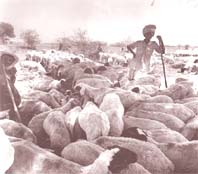 the various ways to involve farmers in the conservation and development of livestock were discussed recently during two meetings organised at Udaipur and Sadari village of Pali district, Rajasthan. International and national experts discussed the crucial problem of livestock management.

"The contribution of livestock to gross domestic product ( gdp ) is about 10 per cent, but not even one per cent of the GDP is spent on their care," says N S Ramaswamy, former director of the Indian Institute of Management, Bangalore. "In the past livestock were not cared for. Now we have started numerous conservation programmes. But lack of interest shown by state governments is a major problem in conservation efforts," says, S K Prasad director of National Bureau of Animal Genetic Resources, Karnal, Haryana.