A possible way of countering the virulence of a fungus 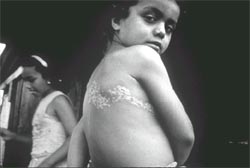 candida albicans is a common skin fungus. In fact, it is the usual culprit whenever someone, whose immune defences are down, contracts a skin infection. The result of the infection is more of a nuisance than anything else. However, as frequently is the case, Candida sometimes escapes from the skin and gets into the circulatory system. The result is what is called systematic Candidiasis , a condition that can prove fatal.

One way to control infections could be to starve the pathogen of something which is essential for its survival but for which it has to depend on its host. It turns out that one such factor is iron. Iron is essential for a number of many processes in living systems; it acts as a co-factor of a large number of enzymes, including those that are necessary for the copying of dna, and for reducing molecular oxygen (the ultimate step in breathing). Many pathogens, for example the bacteria that cause influenza and plague, require iron -- just as their hosts do -- but cannot manufacture it themselves. Instead, they make use of extraordinarily efficient iron-uptake mechanisms to latch on to some of the very little iron that the hosts' bodies contain. (In turn, the hosts have evolved defences that enable them to withhold iron from the invaders).

The way in which the pathogen takes up iron from the host's body can be thought of as a 'virulence factor': in its absence the infection cannot lead to disease. To return to Candida : might it be possible to get back at it by learning more of the virulence factors that enable it to scavenge iron from the body? N Ramanan and Y Wang of the Institute of Molecular and Cell Biology in Singapore show that the outlook appears favourable. Their approach was ingenious ( Science , vol 208, no 5468, p1062-1064, 2000). They grew Candida under two different environmental conditions, one containing sufficient iron and the other containing so little iron that the fungus would be compelled to make full use of its iron-accessing machinery in order to grow and divide. Therefore, the hypothesis went, genes that were essential for harvesting iron would be working full blast, as it were, in the iron-poor environment. A comparison of all the genes that were expressed in the two environments, then, should contain, as part of the difference in patterns of expression, the crucial virulence genes.

Happily, the results of the experiment confirmed the hypothesis. Two genes were identified, both of which make proteins that ferry iron from the external environment. Curiously, their expression patterns were exactly opposite. One gene ( c a ftr 1) starts getting expressed when iron levels in the neighbourhood of the fungus fall very low; the expression shuts off when the levels are sufficient for iron to get into the fungal cell on its own (say by diffusion). The second gene ( c a ftr 2) displays exactly the opposite pattern, being 'switched on' by an excess of iron and 'switched off' when iron levels fall. Obviously, c a ftr 1 is a useful candidate gene if one wants to think of possible ways of handling Candida infections. This turned out to be the case. Candida mutants that lacked c a ftr 1 -- not c a ftr2 -- grew very poorly in a medium that was deficient in iron; besides, when tested on mice, they were unable to establish systemic Candidiasis .

This is a highly significant finding and may open the door to useful therapeutic measures.