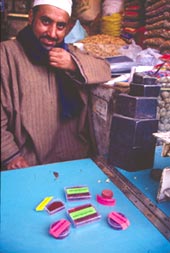 with a view to weeding out adulteration from the saffron industry of Jammu and Kashmir (j&k), local experts have proposed the registration of the product under geographical indication (gi) in a manner similar to Basmati rice. They have also suggested that a single brand of Kashmiri saffron be floated.

"It is not outsiders alone who resort to malpractices. Some of our own people are also involved in selling the adulterated variety," alleges G M Pampori, president, Kashmiri Saffron Growers and Dealers Association. "We had suggested the registration of saffron under gi and are in touch with Delhi. But it is still just a proposal," reveals A Sahasaraman, principal secretary of j&k's industries department. It may, however, be noted that providing gi for Kashmiri saffron would merely safeguard the domestic interests of saffron-growers. In the international market, gi protection is extended only to wines and spirits.

According to Pampori, unprecedented drought and disease have also led to a decrease in saffron production in the valley. "We had set up two marketing societies -- the Kashmir Kesar Bhandar and Kashmir Kisan Kesar Bhandar (kkkb) -- to promote the local saffron variety. Although kkkb has one member each from the 205 villages that produce saffron, yet this idea has not taken off," laments Pampori. The j&k government has formulated an action plan for the promotion of saffron cultivation under the state's macro-management programme. While saffron growers have welcomed the move, they have demanded immediate action to save the industry from the clutches of the adulteration mafia.