A solution to its biggest pest in sight 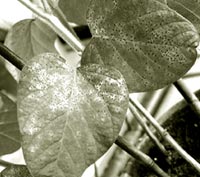 in a major breakthrough, us researchers have located a gene in soyabean dna resistant to its worst enemy -- soyabean aphid (Aphis glycines Matsumura). The finding by scientists working at the department of crop sciences, University of Illinois, was reported in Crop Science (Vol 44, No 1).

Aphids are sap-sucking pests that can severely curtail crop production. In July 2000, soyabean aphid, which originated in Asia, infested the midwestern us. In 2001, aphids invaded soyabean (Glycine max) fields in Minnesota -- several thousand aphids were found on each plant -- and reduced the yield by more than half. The average loss varied from 101 kg to 202 kg per hectare in some fields. The state was a "hot spot" for aphids in 2003 also. The pest has been a big problem in other countries, too. China has been suffering the menace since 1962. In the worst instance that occurred in 1994, A glycines reduced soyabean yields to 52 per cent. Besides depriving plants of nutrition, the bugs pose the threat of transmitting certain plant viruses they carry such as the Alfalfa mosaic virus and the Soyabean dwarf virus.

The aphid-resistant gene was discovered by a team comprising Glen Hartman, a plant pathologist with the us Department of Agriculture, senior research associate Curtis Hill and soyabean breeder Brian Diers from the University of Illinois. They evaluated several soyabean varieties from the world over. Resistance to A glycines was discovered and established in the germplasm of only two North American varieties: Dowling and Jackson.

Research efforts now are focussing on breeding the resistant gene into the commercial varieties. A genetic resistance is likely to be most economical, particularly if combined with chemical and other control methods. Aphid-resistant varieties are likely to be made available to the farmers by 2008.

Another disease that seriously impairs production worldwide is Asiatic soyabean rust. The tropical disease attacks a plant and defoliates it, killing the plant or severely reducing yields. In 2003, Brazilian farmers spent about us $1 billion in damage and control measures following rust infestation. Researchers in Georgia are working on how to combat the rust, which is caused by a fungus, Phakopsora pachyrhizi.