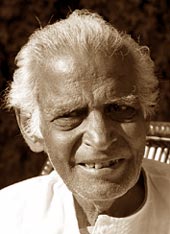 Renowned folk imagist Komal Kothari passed away in Jodhpur on April 20 after a prolonged bout with cancer. He was 75. Komalda, as everyone fondly called him, will be remembered for his extensive work on Rajasthan's folk music. Mention the three tribes of folk musicians, Langas, Manganiars and Kalbelias, and people will think of his institution, Rupayan, which he co-founded in 1964 to save Rajasthan's folk arts.

While working for the Rajasthan Sangeet Natak Akademi, Komalda travelled through desert trails and cities like Jaisalmer convincing folk musicians to record for him and preserve their art. He once recollected one such attempt with Antar Khan Manganiyar in a street in Jodhpur in 1960. I was preparing my vintage tape recorder and when I turned around I found Manganiyar sprinting away. I chased him and caught up with some effort. It turned out that Manganiyar feared the machine would swallow his voice if he sang in front of it."

Komalda's interest became his life's focus and over the years he recorded folk music and ensured that folk aritsts found a place in performance circuits around the world. In arguably the first attempt of its kind in the country, he single handedly recreated the image of a tribal community. He used their traditional armoury of livelihood options to fashion a niche which the community could take pride in. Sakar Khan, the legendry Khamaicha player, once said at a concert: "I think we are of the same age but he is like my father. He has given us our new lives."

Nek Mohammed, the full-throated Langa singer while speaking at the same occasion, commented: "I sing and make money because he has made people pay attention to us. But above all this, he has imbibed in us that we must go back to our villages after each tour, invest in our rural lives and take pride in our tradition."

Komalda rekindled the debate on patron-artiste relation in the post-colonial era. He linked Rajasthan's desert ecology to the cultural and economic practices its people, and his work led to communities being viewed as culturally and ecologically endowed to fight economic challenges. Till the last, Komalda was reluctant to write down his thoughts. Instead of writing, he dreamt of setting up a 'living museum'. The theme of the museum, he dreamt, was to be the ecology of the broom -- the grass from which it is made to the people who used it. In the most mundane of things, he saw life spun and wanted others to see it.