Say it in Kazakh

Kazakhstan is making it tough for government employees who are not proficient in Kazakh, the country’s state language. 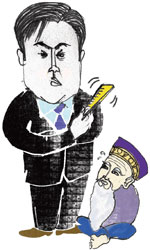 He said, in addition to tests on computers, state workers may have to write essays to ensure that “any person coming to work for the state is able to formulate and elucidate thoughts (in Kazakh)”. He said the move is needed as some employees could not fill out vacation requests properly. About a decade ago, Kazakh President Nursultan Nazarbaev warned citizens that they would have to be proficient in the language within 10 years. Russian is widely used among the population, including state officials.