Tells states to keep big contractors out of nutrition programme for children, and pregnant and lactating women 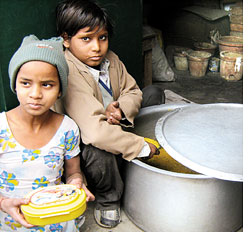 ICDS, which was started in 1975 and is now a part of the National Food Security Act, provides for supplementary nutrition for all children from the age of six months to six years, and pregnant and lactating women through anganwadi centres.

By directing states to decentralise procurement, the court was simply reiterating a 10 year old order. The 2004 order stated that children between the ages three and six years, attending anganwadis for pre-primary education, will be served hot cooked meals.

All children between six months to three years, pregnant and lactating women and adolescent girls are provided meals or “take home rations” (THR). The bulk of the supplementary nutrition programme costs are in this category of THR/meals.

The Supreme Court bench comprising Justice TS Thakur and Justice F M Ibrahim Kalifulla on Monday directed government of Gujarat and Rajasthan and Uttar Pradesh to end procurement of processed food prepared by “big contractors” and decentralise it at the earliest so the procurement from local self help groups or women’s groups can be started. The order was given while hearing government’s plea to provide more time for decentralisation.

Non-compliant Gujarat
In August last year, while hearing Gujarat government’s plea seeking more time for decentralisation of procurement, the Supreme Court had directed the government to effect the change in one year.

In the order dated August 6, 2013, the court stated: “In the mean time we permit the Government of Gujarat to continue the system under which it has been procuring for distribution of Take Home Ration ….....This order shall not be interpreted to mean that it will take no steps or will go slow on similar.....the state would therefore would do well to diligently identify not only reliable SHGs who can be entrusted with the process of setting up of the plants but also providing all such assistance as may be required for the plants to become functional as early as possible........we make it clear that in case it is found that the state government has not taken appropriate steps in terms of what we have said above, we may be forced to recall this order and issue appropriate direction in the matter.....”

In 2001, People’s Union for Civil Liberties (PUCL), a human rights organisation, filed a case (WP Civil 196 of 2001), which cited incidents of starvation deaths despite the storehouses of Food Corporation of India (FCI) overflowing with grains.

While hearing this petition in October, 2004, the court had issued directions that contractors shall not supply food to ICDS centres. “The contractors shall not be used for supply of nutrition in anganwadis and preferably ICDS funds shall spent by making use of village communities, SHGs and mahila mandals for buying of grains and preparation of meals,” the order said.

In December, 2006, the court reiterated its order and directed all states to submit affidavits giving details of the steps that have been taken vis-a-vis the 2004 orders.

The governments of Gujarat and Rajasthan failed to comply with the orders and asked for extension for providing food through contractors in ICDS.

On the basis of the progress report filed by the government of Gujarat in decentralising procurement of take home rations, the bench noted that the though 13 projects were sanctioned only four were operational as of today. Even if the 13 projects commissioned were fully operational, they would only produce 675 MT per month as against the required 12,000 MT per month.

The court noted that the progress was very slow and this rate the government would take another 12 years to complete the project. It also noted that the state had no plan in place to implement the orders for decentralisation. It directed the state of Gujarat to file an action plan for completely decentralising procurement for ICDS within two years along with progress updates every six months while granting interim relief to procure from contractors.

“While it was not recorded in the order, the court observed that Gujarat was claiming to be number one, but the largest project in Gujarat, that of Banas Dairy for THR, had not even begun and is awaiting land clearances even after a year,” says Sejal Dand, a right to food activist, who was present in court when the order was passed.

The court also directed the government of Uttar Pradesh to submit its status report on decentralising procurement for supplementary nutrition programme in response to a public interest petition filed in the state high court and subsequently referred to the Supreme Court. The petition has alleged corruption by contractors in ICDS, based on the reports of CAG, state human rights commission and the commissioners of the Supreme Court appointed in WP 196 of 2001.