What happens to those that are under construction or have already obtained green clearances?

The Supreme Court order of August 13, directing the Union Ministry of Environment and Forests (MoEF) and Uttarakhand not to grant any further environment or forest clearances to hydroelectric projects in the state till further orders, has stalled as many as 96 proposed projects. The court while expressing concern over the large number of dam and power projects in the state, had also directed MoEF to appoint an expert body to study whether the existing and under-construction hydel projects contributed to the disaster that struck the state in June this year.

Activists have, however, expressed concern that most of the mega projects that have already obtained green clearances will not be affected—the 171MW Lata Tapovan and 520MW Tapovan Vishnugad projects in Chamoli district, for example. Only a handful of projects that have applied for environmental and forest clearances like the Jhelam-Tamak hydroelectric project (128MW) on the Dhauli Ganga river in Pithoragarh district, Devsari project (252MW) on the river Pinder in Chamoli district and Koti-Bhel project (95 MW) on the Bhagirathi in Tehri Garhwal will be blocked by Supreme Court order, they add.  Three other such projects were axed earlier—Bhaironghati, Loharinag Pala and Pala Maneri—following the fast unto death protest undertaken by environmental engineer and retired professor, G D Agarwal.  Of these three, Loharinag Pala had obtained all clearances.

There are over 90 operating hydropower projects in Uttarakhand; 40 are under construction and 190 more are proposed.

The Supreme Court order also referred to the B K Chaturvedi Committee that was appointed by the National Ganga River Basin Authority  in June 2012 while observing that detailed technical and scientific study of cumulative impact of projects on the Alaknanda and Bhagirathi rivers is needed. The committee, appointed to review existing and ongoing hydroelectric projects on the Ganga and its tributaries, had recommended that six river stretches of the Alaknanda and the Bhagirathi—Nayar, Bal Ganga, Rishi Ganga, Assi Ganga, Dhauli Ganga (upper reaches), Birahi Ganga and Bhyundar Ganga—should be conserved in their pristine form and that no new power projects should be taken up in these river basins.

A total of 69 hydropower projects with a capacity of more than 9,000 MW were under review of the inter-ministerial group which was set up following an agitation by environmentalists and religious leaders against the development of scores of hydro power projects on the river Bhagirathi.

The Chaturvedi committee recommended that no new hydropower projects be taken up over and above the 69 projects reviewed by the inter-ministerial group. Of these, 29 are mega projects (above 25MW capacity). Eleven of them are in various stages of clearance. Their fate now hangs in balance. The Bhaironghati, Loharinag Pala and Pala Maneri were in this list. Though questions are being raised as to whether these three projects could restart after the court directives, retired professor of Indian Institute of Managament and activist Bharat Jhunjhunwala says the court order does not state whether the projects stalled by the government would start again. 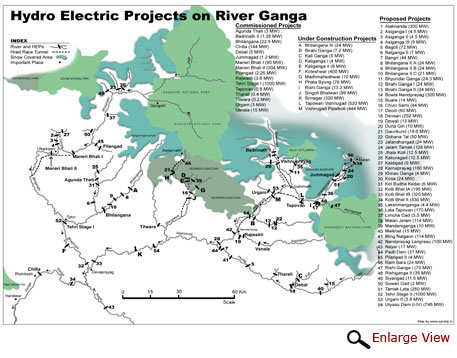 The question then is: what would be the fate of other hydel projects? “Several projects among the 69 proposed in the Bhagirathi and Alaknanda basins are already in the process of clearance,” says Jhunjhunwala.  These include the one on Bhyundar Ganga in Chamoli district and the Rupsiabagar Khasiabara hydroelectric project in Pithoragarh district. The Supreme Court judgement indicates these projects would not be cleared till further orders of the court. Besides these, there are a large number of other projects proposed in Uttarakhand. The court order has stalled them as well, says Jhunjhunwala.

Convener of non-profit Ganga Avahan, Hemant Dhyani, points to certain amguities in the court judgement. “It does not state what should be the fate of projects that have already got clearances It just saysthat other projects should not be given clearances,” says Dhyani. He adds that court order does not make much of a difference because “the present 69 projects on the Alaknanda and the Bhagirathi are enough to damage the valley.” He adds, “we would have been happier if the court said that under-construction projects should be scrapped,” says Dhyani while citing examples of Phata Byung and Singholi Bhatwari hydel projects. Muck from these projects increased the damage during floods and changed the course of Alaknanda river.

Dhyani also points to another problem with such projects which make clearances a mere formality. Developers undertake construction work first and take clearances later on. “So, even when we think a project has not been cleared, construction and blasting work goes on,” he says.

The court order also refers to the 24 dams studied by the Wildlife Institute of India on the Alaknanda and Bhagirathi. The apex court has asked MoEF to examine whether the 24 hydroelectric projects will “significantly impact the diversity of the Alaknanda and Bhagirathi river basins”. The WII’s cumulative impact assessment report had recommended that the 24 projects should be scrapped. But the ministry did not follow the recommendations all; work on some of them, like the 300 MW Alaknanda dam and 24 MW Bhyundar Ganga dam is under way.

Activists are now pinning some hope on the court order to examine whether existing and under-construction projects compounded the impact of the disaster that hit Uttarakhand in June. “The only positive sign now is that the court has directed the ministry to set up an expert body to study the environmental impact of hydroelectric projects that are in existence or under construction,” says Dhyani. The expert committee to be appointed for the purpose has been directed to submit its report in three months by the court along with other reports sought.