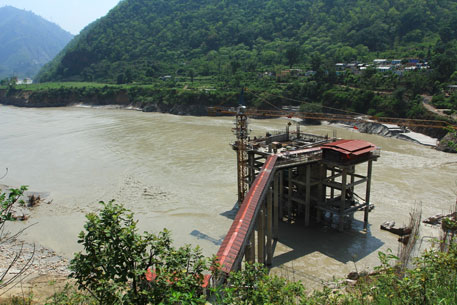 The Supreme Court order asking the Centre to appoint an expert committee to assess whether dams compounded the damage caused by floods in Uttarakhand  in June this year also dealt with the controversy over relocation of the Dhari Devi temple. The order dismissed the Centre's plea that the Dhari devi deity should not be shifted from its original place on the rock outcrop for the Srinagar Hydro-Electric project on the Alaknanda river, as it would hurt religious feelings of the masses.

The bench of justices K S Radhakrishnan and Dipak Misra found little merit in the argument that raising the temple to a higher platform would wound the religious feelings of the devotees or violate the rights guaranteed under Article 25 of the Constitution. “The sacred rock on which the temple exists is still kept intact and only the height of the temple increased so that the temple would not be submerged in the water. We are of the view that none of the rights of the devotees of Dhari Devi temple has been affected by raising the level of the temple, which remains attached to the sacred rock,” the order stated.

The judgement brings to a close the hearing on the petition filed by  activist Anuj Joshi and retired IIM professor Bharat Jhunjhunwala in the Uttarakhand High Court in Nainital, and later in the Supreme Court. Jhunjhunwala had highlighted the necessity of keeping the Dhari Devi deity at the original spot. He had argued that Right to Worship stands at a higher pedestal than Right to Life under Article 21 and that any disturbance to the temple would violate people's right to worship without any hindrance as guaranteed under Article 25 of the Constitution of India.

Alaknanda Hydro Power Company Limited (AHPCL), a subsidiary of infrastructure major GVK, had been trying to relocate the Dhari Devi temple from its original site near Srinagar town. This is meant to prevent the temple from being submerged by the project, and would allow enhancing of the hydro-electric project’s capacity from 200 MW to 330 MW. GVK was given the task of completing the project in 2006 after its construction remained suspended for nearly 20 years because of financial crunch and other factors.

The Supreme Court, on April 25 this year, had ordered the Union Ministry of Environment and Forests (MoEF) to verify the current status of environmental compliance of conditions by AHPCL as stipulated in the environmental clearance of May, 1985 as well as MoEF’s order dated June 30, 2011. The verification was to be carried out by a joint committee comprising officials of MoEF and the government of Uttarakhand. MoEF constituted a joint committee which visited the project site on May 1 and 2 and submitted its report on May 3.

The committee report reads: “To preserve religious sanctity and character of the Dhari devi temple, a modified plan will be prepared in collaboration with INTACH, a conservation architect, the local temple samity (committee) and the representatives of GSI (Geological Survey of India). The plan should, inter alia, examine how part of rock on which the platform of the deity has been constructed, along with the rock that formed its backdrop, shall be mounted at a higher elevation in such a way that it maintains contact with the base rock from which it is raised.”

The affidavit MoEF submitted in Supreme Court on May 6 states that the Dhari Devi temple is of “tremendous religious, emotional and cultural significance for people all over the country…several religious leaders have undertaken fast unto death on the score and several have announced that several will commit jal samadhi (death by drowning self)”. The affidavit also states that BJP leader Uma Bharati also visited the site several times and announced she will take jal samadhi if the temple was disturbed.
The affidavit also pointed out that recent case of Orissa Mining Corporation (Vedanta case), MoEF had put forward similar arguments regarding the rights of the local tribal people to worship the Niyamgiri hill and the Supreme Court had ruled that the right to worship must be respected.

The bench said on Tuesday that in the Orissa Mining Corporation v. MoEF, the Court was examining the rights of Schedule Tribes and the Traditional Forest Dwellers under the Forest Rights Act, 2006 in the light of Articles 25 and 26 of the Constitution. The court held that those articles guarantee the right to practice and proposals not only in matters of faith or beliefs, but all rituals and observation. “We are of the view that none of the rights of the devotees of Dhari Devi Temple has been affected by raising the level of the temple, which remains attached to the Sacred Rock,” the court said.

The court said on Tuesday that the report is now being questioned by the MoEF, in spite of the fact, that it constituted the joint team which included a director of MoEF as its representative.

Earlier on May 7 this year, MoEF issued orders to stop the work to raise the level of the Dhari Devi temple. The work is 98 per cent complete. The move followed close on the heels of the ministry’s submission to the Supreme Court that the temple should not be shifted at all because of the religious sentiments attached to it. However, on May 16 MoEF revoked its ‘stop-work order’  after the apex court criticised it. AHPCL had submitted in the court that it would relocate the idol on July 13. AHPCL officials say the idol was relocated in a hurry as the temple was in danger of being submerged due to heavy floods in the region.

The bench said: “The Dhari Devi temple is not included in the protected monuments of Archaelogical Survey of India and it is a local temple to be worshipped by nearby villagers only. All the local villagers and the priest of the temple are in agreement with the project authorities to raise the temple,” the bench said.