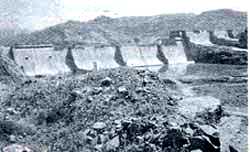 The controversy over the reduction of dam height of the Sardar Sarovar project is back in the news with the Gujarat and Madhya Pradesh governments locking horns to scale political heights over it. The disagreement is likely to explode in the forthcoming meeting of the Sardar Sarovar Construction Advisory Committee, which supervises the construction of the dam. The issue has taken on added significance with the imminent Assembly elections in Gujarat.

After a dramatic announcement by Madhya Pradesh chief minister Dig Vijay Singh, the proposal to reduce the dam height has been included in the agenda of the meeting for the first time. The Narmada Control Authority has also agreed to take this up in its next meeting. The Gujarat government, however, is vehemently, opposed to the move to reduce the height of the dam as it would adversely affect the political credibility of the ruling party in the state. Any move "detrimental" to the project can influence electoral decision.

The Singh government is getting increasingly isolated as Central ministers are reluctant to harm Gujarat's interest on the eve of the polls and as the 'Maharashtra government has chosen to remain neutral and significantly silent on the issue. Singh might even find it diffcult to push yet another commitment made to the Narmada Bachao Andolan to oppose further construction till the oustees in the Narmada valley are properly settled.

Gujarat accuses Madhya Pradesh of exaggerating the resettlement problem and even inflating the figures of the oustees. Sanat Mehta, chairperson of the Sardar Sarovar Narmada Nigam Ltd, contends that detailed analysis indicates that Madhya Pradesh is magnifying the resettlement problem. Even as there is "no going back" for Singh, the Gujarat government is busy whipping up its prodam propaganda.