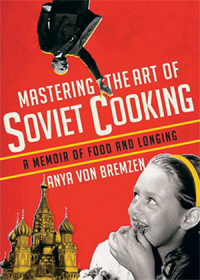 Which country is defined by its love for food? Answers are likely to be France or Italy. India perhaps. But Anya von Bremzen, who was born in the Brezhnev-era Soviet Union, says her homeland was also passionate about food—albeit in a different way. “The relationship Russians have had with their food is much more complicated because much of the time it was about fantasising about having a full table, about being able to go to the store without a line.”

Food writer von Bremzen’s previous books include Please to the Table, a collection of recipes from the countries of the former Soviet Union. But her latest work, Mastering the Art of Soviet Cooking: A Memoir Of Food And Longing, is more than just a cookbook. It’s a personal account that braids von Bremzen’s family history into the tumultuous decades of the Soviet century and its continually fraught relationship with food.

With each family anecdote, she conjures up recollections of flavours and foods.