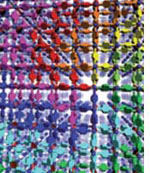 How about DNA that codes for carbon capture instead of protein formation? Scientists made a paradigm shift from tweaking actual genes—they created “three-dimensional, DNA -like crystals” that direct the capture of carbon emissions before they reach the atmosphere. A result of amalgamating chemistry, material sciences and biology, the synthetic gene is up for industrial and vehicular use.

Arthropods, that classify the creepy, crawly bugs on Earth, keep expanding their membership. The latest addition is the long centipede-like creature with many legs and no eyes living a quiet life in the Bahamas.Until the late 1970s nobody knew it existed.

What the scientists thought was a shrimp (Crustaceae) turned out to be a modern species so fitting it into a specific group of bugs proved difficult. After a decade of research and painstaking analysis of 75 different crustacean species a new family tree was drawn up.

Calling it the "surprising crustacean", the team put it under a new group, Xenocarids, that will contain all the shrimp-like creatures found on Earth. It also contains the triops, another tiny arthropod that is only now recognized as a modern crustacean.

The Egyptian government adopted policies to reclaim lands extending along the river Nile. The Bustan 3 area, located in the west delta of the Egyptian desert, was targeted for rescue in the 1990s. Satellite images of the land showed:

Quite soon Indian film music directors might have to forgo exquisite locales like the backdrop of giant sequoia trees because climate change is out to get it. With coastal fog declining across California, the entire redwood ecosystem is endangered. A team evaluated data from two airports—Monterey and Arcata—that goes back to 1951. Using this data and from more than 100 meteorology stations inland, the scientists showed that the coast-inland temperature difference had decreased substantially and, in turn, the density of fog. The redwoods need cool, humid summers to survive. Decrease in fog and an increase in dry temperatures would endanger the entire ecosystem and subsequently the weather pattern. The dampness of this region the year round brings in heavy rains.

Proceedings of the National Academy of Sciences, February 15, 2010 (online)

Scientists recreated big bang in a lab. Using a giant collider they smashed gold ions into each other travelling nearly at the speed of light. The blast lasted only a fraction of a second but generated four trillion°C temperatures. It was enough to melt protons and neutrons down to a hot soup of quarks and gluons—the subatomic particles which clumped together to form the universe. Something happened in the milliseconds after the actual explosion that reached 7.2 trillion° C and favoured birth of matter. That something is still a mystery. This experiment offers clues. It also applies to the field of spintronics—an emerging technology that exploits the electron’s spin and magnetism to create better computers.

The complete genome of an extinct human has been sequenced for the first time. Named Inuk, the man lived 4,000 years ago in Greenland. Using a tuft of hair preserved well under a layer of permafrost for all these years and a novel technique, the anthropoloGISts deduced that he had dry earwax, brown eyes, dark skin. He was going bald, his blood type was A positive, he had shovel-shaped front teeth and was well adapted to cold temperatures. This technique can be extended to studying remains of extinct human cultures to gather more information about them because it allows 80 per cent reconstruction; this was not possible earlier.

Seasons are dashing ahead with their early onset. In a collaborative study scientists across UK gathered data over the previous decade. Several animals and plants have started reproducing 11 days earlier than the schedule. Organisms like the planktons at the bottom of the food chain have adapted most rapidly. But predators have been reluctant to do so. Such time gaps in the predator-prey equation would endanger the survival of animals towards the top of the food chain.
Global Change Biology, February 9, 2010

A team of scientists has developed a device to trap the ions of extremely short-lived elements. Calling it the shiptrap, the physicists used it to study nobelium. It is a heavy element and although discovered in 1952, little was known about it. Using the new ion trap, the scientists were able to study its atomic mass accurately—this gives an idea of the stability of the element and its possible chemical applications. Beside the 92 elements already known, the team created six other such elements. This takes the count of artificially created elements to 20.
Nature, February 11, 2010 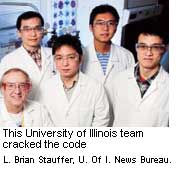 Mosquitoes can synthesize isoprenoids, a compound that human and most other animals do not. A team recently isolated the enzyme, IspH, that promotes the synthesis—researchers have been trying to isolate IspH for decades. These are natural compounds found in bacterial cell walls and allow mosquitoes to complete their life cycle in red blood cells. Now that scientists hit on IspH, finding the right inhibitor needs a bit more research—acetylene blocks similar enzymes.
Proceedings of the National Academy of Sciences, February 19, 2010

About 38 per cent of the world might soon turn into a desert. Using two tools, namely, the LCA ( Life Cycle Analyses) and the GIS (Geographical Information System), geoloGISts listed 15 ecoregions in varying degrees of aridity. Eight might reach the point of no return if something is not done soon: the world’s coastal regions, the Prairies, the Mediterranean region, savannah grasslands, the Steppes, tropical and subtropical Steppes, tropical and subtropical deserts.