The moon has been bombarded by asteroids too many times for scientists to fathom what the ancient satellite looked like. When new civilizations pave over older ones, archaeologists shovel to the bottom. But on the moon, an asteroid did the digging for space scientists. The South-Pole Aitken Basin is a gigantic crater at the southern hemisphere. It formed as an asteroid smashed into the moon millions of years ago. At the edge of this very crater is a smaller one, the Apollo Basin. Apollo Basin ruptured Aitken, exposing a portion of the lower crust belonging to the ancient moon. “It is like going into your basement and digging a deeper hole” said the researchers.

Large deposits of heavy 0metals like iron sank deeper into the crust lie while lighter ones like silicon, potassium, sodium floated to the top forming the original lunar crust. When the iron reserves on earth deplete, mineralogists would know where to look for different sources. Lunar and Planetary Science meeting (Texas), March 4, 2010

Entomology
More than a fly-fisher’s bait

It is impossible to apply adhesive bandages on wet skin, yet caddisfly larvae have been spinning silk cocoons underwater for millions of years. The strength of the web lies in phospates—well-known adhesion promoters, said researchers. After emerging from a common silk-spinning ancestor, caddisflies diverged from moths, butterflies. Although all the groups maintained their silk-spinning abilities, each of the double-ribbon protein threads the caddisfly larvae spin, are phosphorylated. The result is a web that makes grains of rocks and sand stick together, even under water. In the field of medicine, such adhesives could close wounds better than sutures. Biomacromolecules, March 2, 2010 (online)

Lab in a pocket

Understanding the various reactions taking place in the body often warrants isolating single cells but the available technologies are cumbersome. Harvard scientists developed a microfluidic device which is smaller than an ipod nano. It consists of a series of tubes narrower than a strand of human hair which can sort out hundreds of biological reactions in a jiffy.

A drop of liquid caught in the tube contains just one cell; after flowing along the long channels the drop nears a forked end which branches into “keep” and “waste” tubes. A laser reads the drop’s fluorescence level at the junction. Those with the highest fluorescence—meaning highest activity—are pulled into the “keep” tube using electrical force. The team identified mutants of the enzyme, horseradish peroxidase, that catalyze faster. Proceedings of the National Academy of Sciences, February 8, 2010 (online)

Another, in the long list of reasons, to breastfeed: suckling at mother’s lipid-rich milk triggered the expression of the fgf 21 gene in the liver of infant mice. This gene is responsible for initiating the production of brown fat—heat generating adipose tissue—in newly born mammals. When the newborn leaves the mother’s womb, it needs to adjust to a colder set of environmental conditions.

This fat disappears as the baby reaches adulthood or so it was believed. Recent studies linked its presence to a reduced risk of obesity in adults. The research proves that fgf21 is the behind-the-scenes anti-diabetic agent. Further studies would shed light on the gene’s fate in the long run as people end up diabetic. Cell Metabolism, March 3, 2010

A total of 1,000 to 1,500 species of bacteria have the potential to colonize the human gut. An average of 160 species live in every human gut. Scientists took faecal samples of 124 Europeans and decoded the dna sequences of the thousands of genes of the bacteria that constitute an “ecosystem” in their gut. What is interesting is how completely different people were found to have the same set of microbes living inside them. Nature, March 4, 2010

In some people brain tumour grows bigger but can still be removed surgically. In others it turns invasive. Why? Ask the molecule miR-451. From a class that regulates levels of cellular proteins, this molecule was recently found to sustain brain tumours. When the body’s energy levels are high, the molecule directs the cancer to stay put and engorge itself. When levels of food reaching the tumour are low, it directs the cells to pack up and migrate. The discovery of this biomarker could help in predicting the state of a tumour. An estimated 50 adults are diagnosed with brain tumour every day, average survival rate after which is just 14 months. Research that targets the suppression of this molecule is next on agenda. Molecular Cell, March 12, 2010

Taking cue from nature is always a good idea. Imagine a non-stick cookware that could repel grime the way the lotus leaf repels water. A number of jagged protrusions hold the water drop away, not letting them touch the leaf’s surface, thus leaving the leaves dry even after a downpour. Scientists dug nano-cavities into the surface of a smooth material. The holes, measuring mere billionths of a metre, trapped air bubbles, a layer of which prevented water from coming in direct contact with the vessel. This could help do away with polytetrafluoroethylene (more commonly called Teflon)—the compound used to coat non-stick cookware. Nano Letters, February 25, 2010 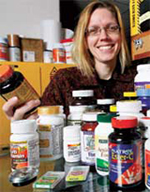 Why does health not improve even when one regularly takes the vitamins? This is because moisture has a way of getting inside the tightly-lidded packs. Researchers studied two forms of vitamin C—sodium ascorbate and ascorbic acid—and found that at room temperature one dissolves at 86 per cent humidity the other goes down at 98 per cent. As moisture builds the essential element dissolves (deliquescence). Once temperatures go down, the solid is back in shape but the vitamin is rendered useless. Humidity in the house, specially in and around bathrooms and kitchens, can rise beyond 98 per cent. Journal of Agricultural and Food Chemistry, February 17, 2010

Researchers collected the Chagas disease-spreading bugs from 255 palm trees in the Amazonia to study the transmission. The team found that for every pandemic unleashed by the bugs, there is a “high-risk” palm tree in the vicinity. The results were consistent across the Amazonia. Reducing unhygienic conditions around or on the crowns of the trees would bring in control. The disease infects 7.5 million Latin Americans every year causing heart, digestive and neurological problems. The bugs transmit the disease-causing parasite Trypano-soma cruzi directly or via food and organic debris. Spraying houses with insecticides is unhelpful; the bugs do not breed inside. PLoS Neglected Tropical Diseases, March 2, 2010

Constituting the base of the food chain, phytoplanktons are the world’s primary food producers. Their distribution around the globe was mapped recently. The map shows the microorganisms are concentrated more in the tropical waters than the poles. Most species diversity can be seen in the mid-latitudinal zones. In higher latitudes, diversity is low but the number of individuals per species is high. Waters with strong currents and a high availability of nutrients attract diverse species turning the areas into hotspots. Science Express, February 25, 2010