Lifestyle diseases are not a modern affliction. Some go back 3,500 years. Burgers and pizzas might not have existed then but the elite of ancient Egypt were prone to heart attacks that are caused by too much of junk food these days. A team put 20 mummies, on display in the Museum of Egyptian Antiquities in Egypt, through CT scan. They found thickening of arteries in the mummies decayed bodies. The researchers began their investigation when they noticed that the nameplate of the pharaoh Merenptah (1213-1203 BC) read death due to dental decay, artherosclerosis and arthritis at the age of 60. Artherosclerosis is a condition where arteries thicken and lead to heart attacks.Journal of the American Medical Association, November 18 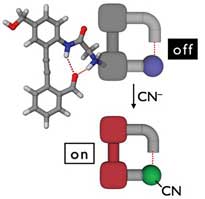 This molecule can detect cyanide in water samples. Inspired by the natural properties of proteins, the sensor molecule has been designed such that when the colourless detector becomes visible on exposure to UV light. Cyanide is an industrial byproduct of steel plants and chemical industries. In developing countries and in some developed ones, cyanide enters public and private drinking water supplies via contaminated rivers and other water bodies used to dump waste by industries. According to the World Health Organization, chronic minor health problems can result from a daily exposure to 0.36 mg for a 60 kg body. The new detector, though not ready for the market, holds hope because it is easy to use, works at normal pH levels of water and its reactivity can further be enhanced. Journal of American Chemical Society, November 11 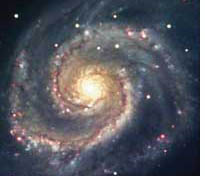 Astrophycists discovered that stars with planets revolving around them have scant lithium content. This is a good clue for space researchers who hunt for planets. So far only 420 of them have been detected because the methods are complex. Planets grow out of a cosmic disc when they form around stars. The reactions between the disc, the emerging planet and the star, require lithium. For proof the researchers presented the suna star with orbiting planets and a severely depleted lithium content. Nature, November 12

Imagine carrying an energy harnessing device in your carone that captures most of the waste heat produced by the engine and converts it into reusable energy. The car gets to run almost double its usual time. Researchers have invented thermal diodes which could convert 90 per cent of wasted heat into electricity quite efficiently. Theory puts a limit to the amount of heat that can actually be converted into electricity. Current devices achieve only 10 per cent of that limit. Once the thermal diodes are in commercial use, electronic devices such as cellphones and laptops would have longer lives. Journal of Applied Physics, November 13 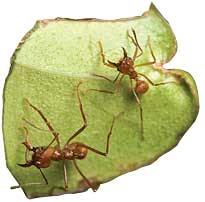 Leaf-cutter ants are a model to draw inspiration from. Apart from being socially gregarious they keep plants well pruned, store the cut foliage on which they cultivate fungus for food and, now scientists say, harvest bacteria. This symbiosis has important implications for the nitrogen cycle. The bacteria fix nitrogen and enhance the growth of the fungal gardens. When ants consume the fungus, the nitrogen becomes part of their bodies and is added to the ecosystems when they die. Leaf-cutters live in the tropics where the soil has limited amount of fixed nitrogen. Each colony has millions of ants. The nitrogen they get from their food is not enough for large colonies to thrive. Science, November 20

An ecosystem can crash in two ways either the landscape changes and spells doom for its flora and fauna or the inhabitants take the road to extinction and spell doom for the landscape. 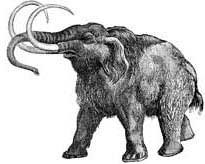 But which came first was not clear in case of mass extinction of land mammals in North America at the end of ice age. Scientists have put together the event disappearance of large woolly mammoths, the sabre-toothed tiger and mastodons shaped the post-ice age earth. Pine trees and grasslands turned into broad-leaved forests with no big herbivores to keep them in check. The number of trees grew and so did the wildfires, shaping the landscape further. This study rules out the hand of human settlements post the ice age era because the collapse began 14,000 years ago; ice age ended only 10,000 years ago. Science, November 19 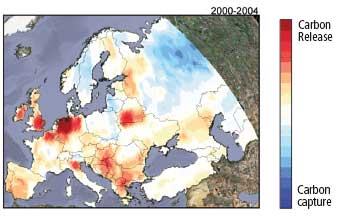 Europes land management is its environments foe. Its forests and grasslands together are capable of absorbing 305 million tonnes of carbon per year which should take care of 19 per cent of fossil fuel emissions. But agricultural lands release their own CO2. This reduces the balance by 4 per cent. Greenhouse gases like nitrous oxide from fertilizers applied to grasslands and crops, and methane from drained peatlands add to the emissions leaving the natural sinks capable of balancing only 2 per cent of emissions from transport and industry. Nature Geoscience, November 22 online

biodiversity
Swept under the rug 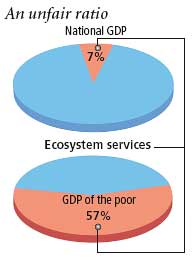 Clean air, fresh water, forests that maintain the carbon cycle, wetlands that keep floods away and rivers that provide fish are taken for granted. They are also over-exploited.

Poor people depend most heavily on these ecosystems. An environment increasingly turning hostile will hit them the hardest. Examples

The global fisheries industry generates US $88-100 billion annually. Lives of 27 million people, mostly poor fisherfolk depend on it. More than a billion people in the developing countries rely on fish as their sole source of protein. Two-thirds of global fish stocks are over-exploited.

Forests account for 57 per cent of the poor peoples income and only 7 per cent of a nations gross domestic product (gdp). Nature, November 19

Pine tree cover is fast moving up the mountain slopesan indication of a rapidly warming planet. Researchers took core samples of living and dead bristlecone pine trees from three different mountain sites and found a surge in tree growth higher up the mountains since the latter part of the 20th century. It is different for trees at lower levels. The pine trees at the treeline grow faster when temperatures are warmer and at lower levels they grow quickly when temperatures are cooler. So the chilly mountaintop is usually the limiting factor for treeline expansion. Now this is reversing as lower levels are too warm and higher up the slopes, temperatures are just right. This research also implies that snow-covered mountaintops would no more remain the worlds water towers. Proceedings of the National Academy of Sciences, November 16 online 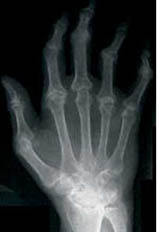 Running up and down the flight of stairs leading to the third floor where one works or stays is an effort to stay fit. But arthritis is increasingly becoming common among people and most cannot use this form of exercise. The disease affects the joints of the old as well as the young but how it spreads was unknown so far. While there was growing evidence that the synovial fibroblastscells present in the fluid that bathes the jointshave a lot to do with it, the link could not be made. Researchers implanted healthy human cartilage and fibroblasts in one part of the bodies of mice and just healthy human cartilage in the other part. Blood vessels were soon carrying the rogue cells to and fro as they destroyed the cartilage. Nature Medicine, November