Four million years ago, the Isthmus of Panama separated the Caribbean from the Pacific Ocean. This changed the reproductive behaviour of Caribbean bryozoans, tiny marine animals that make skeletons of calcium carbonate. They switched from cloning to sexual reproduction; cloning demands quick energy, which they drew from the Pacific's nutrient rich waters. Species that could not switch went extinct. The July issue of Proceedings of the Royal Society B published the study. 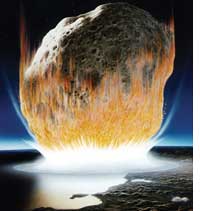 astrochemistry
It was comets

Icy comets brought water to the Earth four billion years ago, not asteroids. During the Late Heavy Bombardment, billions of tonnes of rocks or ice crashed onto the moon and earth.A team calculated the iridium (a mineral commonly found on comets and meteorites) levels in ancient Greenland rocks and the moon to find out if it was brought by asteroids or comets. Asteroid bombardment would leave high iridium levels in rocks whereas the team found extremely low levels, corresponding to the amount comets would dump. This indicated comets caused the collisions, pumelled the Earth with ice and made it life-sustaining, said the study in the July issue of Icarus. 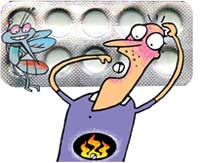 The anti-malarial drug quinine has major side-effects. Researchers have tracked the reason. Quinine inhibits the external uptake of tryptophan, an essential precursor to proteins; the human body cannot produce it. It has to be supplemented by the diet. The team studied the effect of quinine on yeast cell mutants. Yeast cells can make their own tryptophan but in mutants whose tryptophan-coding gene was removed, quinine blocked the external uptake. The drug only worsens the condition of malnourished people while curing them of malaria. The findings, in the July 3 issue of the Journal of Biological Chemistry, suggest taking tryptophan as a supplement with quinine.

hrimp shells can catalyze the conversion of plant oils into biofuels in a fast, cheap and environment-friendly manner. A team produced the catalysts by heating shrimp shells until they turned porous. These were loaded with potassium fluoride to make them catalytic. The shrimp shell catalysts converted 89 per cent of plant oil to biodiesel in three hours, said the study in the August 20 issue of American Chemical Society's Energy & Fuels. Traditional catalysts consist of expensive elements like rhodium which can be used only once unlike shrimp shell catalysts. The reactions produce large quantities of polluted water.

Herbivores prefer not to attack plants that reproduce sexually. Researchers conducted experiments on the evening primrose plant; 85 per cent of its species reproduce sexually. Herbivores were found to feed mainly on the asexual species. Sexual reproduction allows the plant to evolve to defend itself from general predators. Only the few specialized insects that are specific to the plant and evolve with it can override its defences. But asexual species have to ward off a greater number of predators, said the study in the July issue of Proceedings of the National Academy of Sciences.

Binomial latin names are cumbersome to assign. dna barcoding will now be used to classify land plants, said a study in the July issue of the Proceedings of the National Academy of Sciences. A team identified a pair of genes, specific to species, as the markers to identify plants. This barcoding will help better maintain plant biodiversity hotspots that suffer due to a lack of specialists to study them.

The spleen is not just a reservoir for red blood cells, it can also heal the heart. A team induced heart attacks in mice and traced the monocytes released in the blood to the spleen. Monocytes are white blood cells produced by the bone marrow for wound healing; they travel to injured areas via blood. But in mice with the spleen removed, no monocytes were generated during damage to the heart, said the study in the July 31 issue of Science.