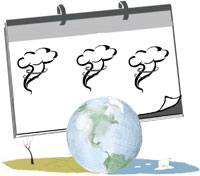 RESEARCHERS DID not consider climate change to be a factor in formation of tornadoes because there was no pattern to link the two. But an analysis of records on tornadoes in the US between 1954 and 2013 has found that there has been a consistent decrease in the number of days witnessing at least one tornado, while the number of days having multiple tornadoes has increased. Though tornadoes are forming on fewer days (187 tornado days in 1971 against 79 in 2013), the severity and frequency of the number of tornadoes formed in one particular day has increased. There were 1,700 in 2011 and 2014 has already seen 189. Climate Dynamics, August 6

MEDICINE
Arthritis cure on the cards?

Scientists HAVE succeeded in curing rheumatoid arthritis in mice. Arthritis causes swelling and inflammation in joints and can destroy the cartilage and bone. The new therapy uses a combination of two components: body's own immune messenger interleukin 4 (IL-4) and an antibody to IL-4 that binds to a protein found only in inflamed tissues. This fused molecule ensures that the drug targets only inflamed areas. This molecule, in combination with a common arthritis drug dexamethasone, was found to have completely cured mice of arthritis. PNAS, August 4

Wildlife CORRIDORS aretracts of natural land that connect habitats divided by agricultural or other human activities. These are set up to promote spread of native species. But such corridors can also lead to spread of invasive species. A study in Florida, US, found that polygyne fire ants (a type of slow-moving fire ants) were able to use wildlife corridors to spread and dominate the habitat. The study indicates it is crucial to study traits of likely invasive species before setting up a corridor. Ecology, August 2014

Exposure TO lead is known to cause several neurological disorders. But it can also cause obesity in rats. Offsprings of mice which had been exposed to lead during pregnancy were found to have an 8-10 per cent increase in weight between three and nine months of age. Mice were exposed to lead through drinking water two weeks before mating and throughout pregnancy. PLoS ONE, August 8