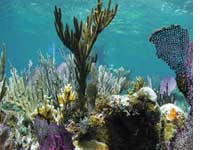 According to researchers from James Cook University rare coral species might not be at high risks of extinction due to small population sizes.Their tendency to hybridize saves them. The previous prediction was that small population sizes led to decreased genetic diversity, which in turn decreased their adaptive capability. However, some Indo-Pacific members of the coral genus Acropora which have a small global population, were found to be less vulnerable to extinction because of their tendency for hybridization. This, in turn, increased their adaptive potential.

Basal Metabolic Rate (bmr) in birds is independent of the body mass, say researchers from the Universities of California, Sheffield and Pretoria. bmr represents the minimum amount of energy needed by a warm-blooded animal for maintaining a constant body temperature. It depends on lean body mass and decreases with the decrease of the same. The research says that bmr in birds varies considerably, depending mainly on their migratory tendencies. bmr of migratory species is considerably higher than that of non-migrants, which is attributed to the high energy requirement for long-distance movements. A stronger explanation is that they live in predominantly cold high-latitude areas.

Paper could be an alternative to silicon to make transistors. Researchers of New University of Lisbon, Portugal, built transistors by coating both sides of a sheet of ordinary paper with metal oxides and applied aluminium contacts onto it. The paper acted as a flexible substrate and an integral part of the semiconductor 'sandwich' at the heart of the transistor, which helped amplify the tiny currents that passed through it. The transistors were produced at room temperature and tested for two months without any deterioration in performance or stability. These paper-based transistors could be used for low-cost, flexible and disposable microelectronics, such as biosensors and light bulbs.

Solar wind, the stream of charged particles billowing away from the sun, is at its weakest for 50 years. nasa scientists, who studied 18 years of data from the Ulysses satellite, said this could have effects right across the solar system, opening it up to more dangerous rays from outer space. The solar wind, mostly consisting of electrons and protons, create a protective bubble called the heliosphere around the planets in the solar system, which helps to shield them from dangerous particles from other parts of space called cosmic rays. These pose health threats to astronauts and can wreak havoc with electronics; this must be taken in account while launching satellites. But researchers are not surprised by this activity since the amount of radiation sent off by the sun operates in an 11-year cycle. Though this dip is lower than those recently observed, it may be in line with centuries-long patterns, they said.

A microscope that studies materials by bouncing helium atoms off their surfaces could be made within a year. This microscope could replace the electron microscopes which uses a stream of electrons to see the image but in the process could destroy the samples. Neutral helium atoms can bounce off any surface and the beam deflected by the electrons at the very edge of the sample, giving a true image of the surface. Though it was known that helium could be used for magnifying objects, there was no way of focussing a ray of helium on the specimen. Researchers from the Autonomous University of Madrid, Spain, plugged this gap. They created a mirror by depositing a few atom-thick layers of lead onto an almost perfectly smooth silicon surface. The mirror helped focus the helium ray on to the specimen. It is expected that this microscope would help look at the electron density of individual proteins.

health and medicine
No to autism cure trials

The us National Institute of Mental Health cancelled clinical trials of a controversial treatment for autistic children. The treatment, called chelation, involved removal of heavy metals, like mercury, from the blood of autistic children. The institute took the step after reviewing studies that suggested chelation could cause cognitive damage. Some parents subject their children to chelation because they believe that autism is caused by mercury in the vaccines administered to them. Mercury is a preservative in vaccines that kills contaminants and keeps the vaccine potent for longer periods. A section of scientists have disputed the autism-vaccine link and welcomed the institute's decision.

pollution
Appendicitis in the air 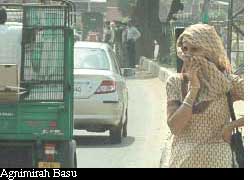 Exposure to air pollutants greatly increases chances of appendicitis, said a study presented at the American College of Gastroenterology conference. Air pollution particularly due to high concentrations of ground-level ozone increases the risk of tissue inflammation, leading to different diseases. Findings showed that air pollution was more likely to cause appendicitis in the months when people spend more time outdoors.