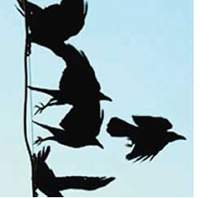 Greater bird diversity protects humans from a deadly virus known to cause meningitis. The West Nile Virus, usually maintained in a bird-mosquito cycle in nature, can be transmitted to humans through a mosquito bite. Biologists from Washington University recently said most birds are bad reservoirs for the virus and so it fails to further infect other birds. Where many bird species exist, very few mosquitoes get infected, reducing the risk for humans. But this does not hold true for crows and sparrows found in large numbers around human settlements. Thus chances become high of the mosquitoes biting a bird and then transmitting the virus directly to a human host.

physical sciences
A clue to walk on water

Could Jesus have taken a tip or two from the humble snail to walk across the sea of Galilee? A group of scientists from San Diego, us , found a mode of propulsion based on how snails create ripples while crawling on water. The finding can be used to create devices to walk on water. The scientists said that some freshwater and marine snails crawl on the surface of water by secreting a trail of mucus. The snail's foot expands and contracts producing waves in the mucus layer. Parts of the mucus film get squeezed while other parts are stretched creating a pressure that pushes the foot forward. This creates distortion on the water surface and helps the snail move.

Scientists recently unravelled the genetic code of Plasmodium vivax-- one of the four malarial parasites commonly found in Asia and the Americas. The team of scientists from the Institute for Genomic Research, the us, analyzed the full genetic material, or genome, of the parasite and suggested that P vivax could have an alternative mechanism for infecting the human red blood cells, in which the parasite resides and multiplies during its complex life cycle. These routes of infection were not observed in earlier research. The biologists also found that the genome of P vivax bears a much greater resemblance to that of P falciparum , than previously thought. Only 150 genes are specific to P vivax. Although most of the studies have been done on P falciparum, responsible for the most virulent type of malaria, P vivax is increasingly turning malignant. Every year, over 300 million cases of malaria reported from Papua New Guinea, India and Brazil are caused by P vivax.

Sensory devices thinner than human hair could soon pave the way for faster and more accurate medical diagnostic tests. Scientists from Yale University, us, recently created nanowire sensors that can detect changes in immune cells. When immune cells sense the presence of a bacteria or a virus, they get activated and produce an acid. The acid, in turn, generates a tiny current in the nanowire electronics, signalling the presence of that particular agent of disease, or pathogen. Earlier, the nanowires could detect only a generalized activation of the immune cells. The latest breakthrough, however, not only helped them detect the activation but also pinpoint the specific strain of bacteria or virus that has attacked the patient, said the scientists. For example, it can now help determine which strain of flu virus or tuberculosis bacterium has infected the patient.

The frozen Arctic soil could contain double the greenhouse-gas-producing organic material than previously estimated. After analyzing samples from Alaska, researchers from the University of Alaska predicted slight increase in the atmospheric temperature could cause the Arctic tundra to melt, exposing the organic material. From a carbon sink, the Arctic soil could then become a source of greenhouse gases. The northern reaches of Europe and Russia also contain a comparable amount of greenhouse gases, which, if released, would fuel global warming.

With organic food lovers on the rise farmers do not have to use chemicals anymore to treat seeds for fungal spores or viruses. Researchers from Fraunhofer Institute for Electron Beam and Plasma Technology, Germany, developed a way to bombard seeds with electrons to kill the pathogens that caused diseases. When electrons hit the seeds, they destroyed the chemical bonds that held together the molecules in the fungal spores and other pathogens, but without generating heat. At the same time, the intensity of the electron beam was maintained in such a way that the seeds did not suffer any damage. The device can treat 30 tonnes of seeds per hour. 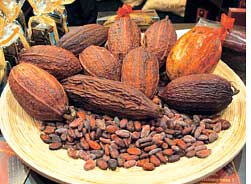