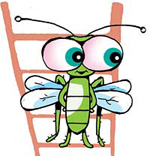 Wonders of this world are not just for big-brained mammals like humans to see. Locusts spend a lot of time walking but they have really short feelers and large eyes. This got scientists thinking as they proved for the first time that insects can see what they are walking into. Locusts climbing a tiny ladder were filmed with high-speed cameras. The footage showed the number of times they missed steps. On assessing the mistakes, the team realized the locusts were using their eyes to see where they were stepping. 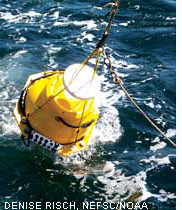 The technology of acoustic tools to study sounds made or heard by marine animals has improved a lot over the last decade. Two new acoustic sensors—real-time and archival—are now being used to improve conservation efforts of the endangered North Atlantic right whales. Real-time sensors are deployed on surface buoys lowered onto oceans and archival sensors are affixed to bottom-moored buoys for long time periods. Marine mammals like whales, dolphins communicate, hunt and attract mates using sounds. Ships regularly pass over the hunting grounds of the endangered right whale. Noises from the vessels and naval sonar stress the animals to the extent they get stranded on shores and die. The blue whale once communicated across entire oceans.

Another study said it lost 90 per cent of its range over the last 40 years.

Evolution occurs faster than was believed—genes mutate within a matter of years, not millions of years. A team traced all the genetic changes in five lines of the mustard relative, Arabidopsis thaliana,  over 30 generations. On an average, each of the 60,000 seedlings observed had inherited one mutation. Plant breeders can find useful mutations within existing plants for better yield and increased drought resistance. The findings help understand why weeds turn herbicide-resistant so quickly; stronger herbicides can be developed to target several rogue genes at once. 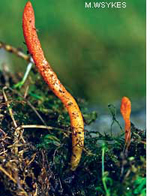 HEALTH AND MEDICINE
Cue from China

From herbal cures to acupuncture, traditional Chinese medicine is accepted by the Western world as an alternative form of treatment. Even in cancer research scientists have finally understood the workings of a drug discovered by Chinese medicine decades ago. Extracted from a rare wild parasitic mushroom called Cordyceps militaris, the drug, cordycepin, aroused the interest of scientists as early as 1950 but owing to technical difficulties it could not be studied much. Scientists now say it works in two ways: at low doses it stops uncontrollable growth of cancerous cells. At high doses it prevents cells from sticking to each other.

Journal of Biological Chemistry, To be published

Oranges for a younger look
Stem cell research has not made much headway as the conversion of adult cells into stem cells is still inefficient. Called induced pleuripotent stem cells, they behave like embryonic stem cells. Looking for ways to reverse the situation, a team found Vitamin C handy, surprisingly. The compound helped a complete and successful transition of adult mouse and human cells into stem cells while keeping ageing at bay. Vitamin C, derived from citrus fruits, is a powerful antioxidant; it cures common cold and now its ability to slow cell ageing increased its worth. Other antioxidants could not produce the same result.

Crime scene investigation series would not look sharp without the dye flourescein—it helps detect latent blood stains. Now it can also be used to view and examine graphene—the thinnest material in the world. Graphene stormed into the world of material physics in 2004 with its one atom thick layer of carbon, unusually high conductive properties and its low-cost applications. The only handicap is that graphene is quite difficult to see. Current imaging techniques are time-consuming like the atomic force microscopy that can view very small surfaces at a time or very expensive like scanning microscopy that can only view materials kept in vacuum. 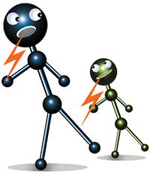 Certain compounds can mimic the chemical signatures of some elements. Plainly speaking, tungsten carbide could be the platinum used in catalytic converter in automobiles. It is cheaper than platinum and more easily available. The amount of energy required to remove electrons from a molecule of tungsten carbide is the same as that required for platinum. Scientists also found such similarities across the periodic table: titanium monoxide mimics nickel; zirconium monoxide mimics palladium.

Proceedings of the National Academy of Sciences, December 28 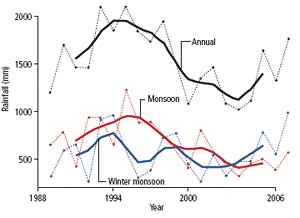 The Southern Western Ghats fall under the tropical montane cloud forest zone—one of the most threatened ecosystems of India. It supports plantations of cardamom, coffee and tea that are sensitive to changes in rainfall pattern. A study that assessed data collected between 1988 and 2007 reports:

* Seasonal and average rainfall has diminished gradually in this zone. The decrease is more pronounced in the summer season.

* The Gavi station in Kerala followed by Venniyar in Tamil Nadu showed the maximum reduction in rainfall in the summer monsoon season.

* Summer monsoon rainfall, however, increased for Periyar in Kerala. The average annual and total rainfall also increased during the study period irrespective of the seasons. 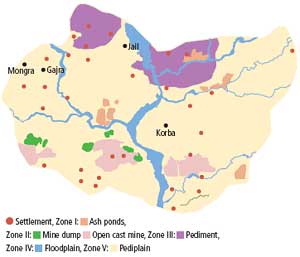 The study of landforms must be used in urban planning. Scientists mapped the areas around Korba in Chhattisgarh using satellite imagery. Some finds:

* Zone I has ash ponds that store slug from thermal power plants. They can poison groundwater if not monitored. 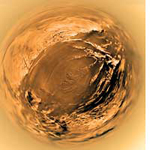 Titan, Saturn’s moon, might have the chemistry Earth had before primitive life forms budded in it. Scientists based their conclusion on the presence of fog in Titan. It was known that Titan’s surface is abundant in liquid methane. The methane evaporates and condenses as fog. For the fog to condense, the atmosphere must be humid. The group surmised that Titan must have streams of water and an active water cycle.