Zebras in warmer regions have bold stripes which help them cool 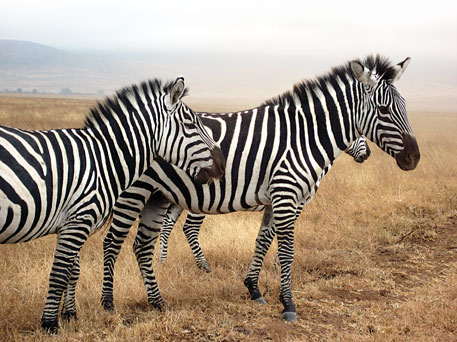 THERE HAVE been various theories on how the zebra got its stripes, ranging from those which say that the stripes make it difficult for predators to spot it to those which say they help ward off biting flies. A study whichanalysed the impact of 29 environmental factors, such as heat, flies and predators, on zebras across 16 locations in Africa found that temperature was the only variable with which zebra stripes had a correlation. Stripes help the zebra regulate its body temperature as they heat up at different rates and create "eddies of air" that have a cooling effect. This mechanism works best when stripes are bold. As a result zebras in areas with lower temperature have fewer and fainter stripes. Royal Society Open Science , January 14

Analysis of 12 observational studies involving 39,560 women in Africa indicates that the use of Depo-Provera, a hormonal birth control contraceptive shot, increases a woman's chance of getting infected with HIV by 40 per cent compared with women who use other methods or no method. About 144 million women use hormonal contraceptives in the world, of which 41 million opt for injectable forms. The Lancet Infectious Diseases, January 8 (online)

Rise in sea-level and temperature during the Holocene period (which began 11,700 years ago) lead to an increase in parasitic infections in molluscs. This has emerged from a study of mollusc fossils of the period. Similar changes in sea level and temperature, which are likely in foreseeable future, can infect molluscs again. And this time, the infection can spread to humans who eat clams and snails. About 56 million people globally suffer from food-borne parasitic infections. PNAS, December 2014

Environmental factors have a greater impact on an individual's immune system than hereditary factors. This has emerged from a study on 78 pairs of identical twins (almost 100 per cent genetically identical) and 27 pairs of fraternal twins (50 per cent genetically identical). Analyses of blood samples of these twins for 200 immune-system components found that environmental factors, such as exposure to toxins and vaccination, had a greater impact than heredity on about two-thirds of the components. Cell, January 15