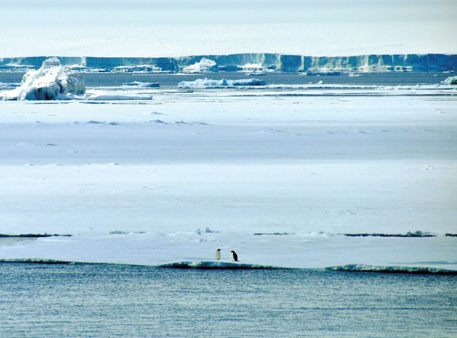 ANTARCTICA HAS been consistently losing ice in the past decade and the rate of loss is increasing. The amount of ice lost by Antarctica between 2003 and 2014 is twice the amount of ice it gained, and the vast majority of that loss was from West Antarctica while the gains were in the eastern part. Since 2008, ice loss from West Antarctica's unstable glaciers doubled from an average 121 billion tonnes annually to twice that amount by 2014. Satellite data shows that Earth's southern most continent lost 92 billion tonnes of ice per year in the period. Earth and Planetary Science Letters, April 1

Noroviruses, THE group of viruses responsible for over 50 per cent of global gastroenteritis cases, can spread by air up to several metres from an infected person. Preventive steps by hospitals during outbreaks may be insufficient to contain this kind of infection. In a study at eight hospitals during gastroenteritis outbreaks, noroviruses were found in the air at six. Virus concentrations ranged from 13 to 2,350 particles per cubic meter of air. A dose of 20 norovirus particles is sufficient to cause gastroenteritis. Clinical Infectious Diseases, April 21 (online)

Neonicotinoids, A class of pesticides, is extremely dangerous to bees and threatens crops that depend on pollination by bees. The pesticide kills brain cells of bees, hindering their ability to learn, collect food or reproduce. In a study, bees were fed a sugar solution with very low levels of neonicotinoid (2.5 parts per billion), found typically in flowers, and the movements of the toxins to the brain was tracked. It emerged that even one-tenth of these levels were enough to harm bees. The FASEB Journal, May 2015

The ASTEROIDthat fell into the ocean near Mexico 66 million years ago and caused extinction of dinosaurs is likely to have triggered global volcanic eruptions. The Deccan Traps in India, formed by lava flows around the same time, were also probably a result of the crash. The impact generated seismic energy throughout the upper 200 km of the earth's mantle, sufficient to trigger volcanic eruptions. The Geological Society of America Bulletin, April 30 (online)