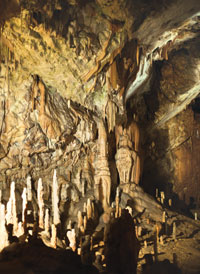 Mountain landscapes are the result of a constant interplay between erosion by climatic forces and uplift due to tectonic forces. Quantifying the rates of erosion and uplift is challenging. Scientists recently studied an ancient cave near the summits of the Allgau mountains in Aust ria. It has the oldest—radiometrically dated dripstone, two million years old. Using isotopic modelling, they studied its geochemical signature and biochemical inclusions, and were able to back-calculate depth of the cave and altitude of the summit at the time the dripstone was formed. Two million years ago the cave was 1,500 m lower and the summit was 500 m lower.

Smaller uplift of the mountain can be attributed to gra dual glacial erosion, the study suggests. Geology, May

Shark, tuna and other top predators in the ocean have suffered major population drop in recent years, causing scientists to consider them as species at the highest risk of extinction. A study found smaller fishes like sardines are at a greater risk, and also require conservation measures.

In the past 60 years, their stocks have declined twice as much as that of the top predators due to overfishing, the scientists said after analysing 200 assessments of fisheries in the developed world. Since they are at the base of food chain and there are relatively few species at that level, a plunge in their population can hit both the oceanic and land food chains. PNAS, May 2 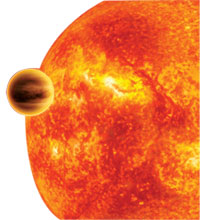 The sun and its planets spin in the same direction. This is not true for extrasolar systems. Using computer model, scientists have explained why. Opposite spin is usually exhibited by planets that are huge, called hot jupiters, and very close to the star. In the beginning, the giant planets lie close to each other but away from the sun, each orbiting in the same direction. A combination of forces— gravitational coupling among planets and powerful tides on the innermost planet—breaks up this symmetry.

Eventually, the inner planet starts orbiting in a needleshaped elongated path, which gradually shrinks. The planet is hauled in close to the star, creating the hot jupiter, and in the process its orbit can flip. Nature, May 12 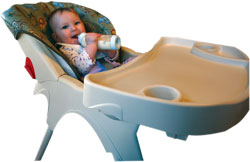 HEALTH
Wean them from the bottle

Babies who are bottle-fed until the age of two are likely to be obese by the time they turn five. Researchers analysed data on 6,750 children in the US and found 22 per cent of them used bottles regularly until two years, meaning they mainly drank from a bottle or were put to bed with one.

Many parents tend to prolong bottle-feeding because they say it pacifies and comforts the child. But this makes babies consume too many calories; a 200 ml bottle with whole milk has 150 calories, 12 per cent of most baby’s daily needs. When compared with kids who stopped using bottle by 12 months, regular users were 33 per cent more likely to be obese. The Journal of Pediatrics, May 5

PHYSICS
A polymer that heals on its own

Nobody likes scratches in their cars’ finish. Scientists have discovered a way to make a polymer that heals itself in the presence of UV light. This could revolutionise coatings and say good bye to scratches. The polymer is called metallosupramolecular, meaning it has metal atoms in it. Usually polymers are combinations of carbon, hydrogen and oxygen.


The distinguishing feature of the self-healing polymer is that it is made of repeating units that build large molecules. The metal ions act as molecular glue. When irradiated with intense UV light, the assembled structures become unglued. This transforms the original solid material into a liquid that flows easily. When the light is switched off, the material re-assembles and solidifies; restoring its original properties. Nature, April 21

Identical lichens found in North America and Australia are actually two different species. They are the examples of convergent evolution, where two species evolve separately but look similar. Both specimens were called Xanthoparmelia tasmanica. Recently, when scientists studied their DNA, the lichens were found to be different.

They have renamed North American lichen as Xanthoparmelia hypofusca. Lichens are easier to study than animals. As they show similar evolutionary patterns, they could be used as substitutes. Bibliotheca Lichenologica, May

Scientists have developed a low-cost portable biosensor that detects mar ine pollutants like oil faster than existing methods. It fuses two technologies, an electronic sensor and a mo noclonal antibody, which binds to the substance it is sensitive to.

When the antibody binds with the pollutant, an electric signal is generated. The biosensor can sense pollutants at levels as low as a few parts per billion. Environmental Toxicology and Chemistry, May 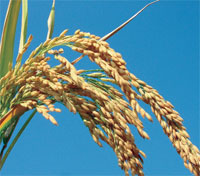 AGRICULTURE
Rice has a Chinese parent

It is a finding that could ignite an India-China row. So far, it was believed rice was domesticated both in India and China around the same time. Now archaeological evidence shows domestication of rice in China’s Yangtze Valley began 9,000 years ago, while in India’s Ganges region it began around 4,000 years ago. Researchers also examined gene fragments on selected chromosomes from a wild and domesticated rice varieties. The results indicate a single origin of rice, meaning it was domesticated in China first. PNAS, May 2

Soap may not always be as clean as it seems. Liquid soap in bulk, refillable dispensers can become contaminated and increase the number of diseasecausing microbes when people wash their hands with it. Refillable dispensers are common in public restrooms. A study conducted at an elementary school in Ohio in the US found that every soap dispenser was contaminated with bacteria. When kids washed with the soap, microbe levels on their hands soared 26 times. This is the first study to quantify the increase in bacteria on hands on washing with contaminated liquid soap.
Applied and Environmental Microbiology, May

Fluctuations in sea-level rise rates are thought to dominate the formation and evolution of coastal wetlands. Now scientists have found that land-use–related changes also drive the formation of expansive marshland and vegetation. They say when the settlers started clearing the land in New England two centuries ago it increased the amount of sediments in the rivers.

The large amo unts of sediment travelling in rivers and streams to the coastline spurred wetland growth, leading to marshes that line the coast of New England. The scientists studied samples from Plum Island Estuary—the largest in New England—correlating the presence of fossils and other organic matter to the initial formation of the salt marsh. Geology, May 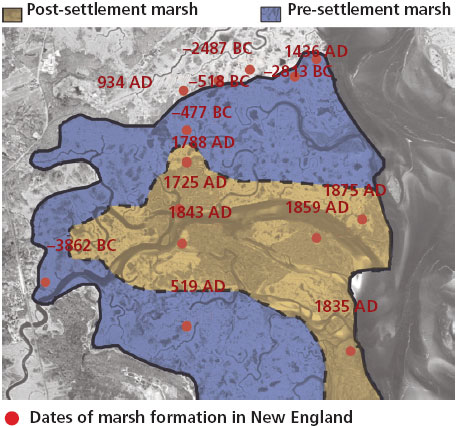