Contrary to public perception that last summer’s BP oil spill did little damage to marine life, a study has found a common fish in the marshes has been hurt severely. It is now turning up deformed and may be unable to reproduce properly. The researchers studied killifish, a small but abundant species found in Louisiana’s marshes, and found the fish were showing signs of damage though the amount of oil in their tissues and in the water where they were sampled was extremely low. The gills, intestines and cardiovascular organs of the fish have been damaged and they are smaller in size than they should be. Fish in the embryonic stage were the most affected and are not growing properly. PNAS, September 26

Albert Einstein’s general theory of relativity has proved accurate in predicting how light travels from some of the distant galaxy clusters in the universe. Large distances in the universe are measured using redshift, where light’s wavelength moves more towards red with a galaxy’s remoteness. Einstein’s theory says redshift is affected by gravity from large masses like galaxy clusters. But this gravitational influence has not been measured beyond our solar system. Scientists looked at data from about 8,000 galaxy clusters and found the calculations of the gravitational redshift based on relativity matched the astronomical observations. Nature, September 28

Ozone is not created by human activities alone; plants also contribute to it. Trees emit organic chemicals called isoprenes, which help them protect themselves from insects, heat and other foes. The isoprenes get converted into ozone which is a known pollutant and greenhouse gas. Scientists have found that trees have a biological clock that controls their isoprene emissions. The scientists studied isoprene emissions in forests in Malaysia. They found it peaked during midday and dropped to the lowest at night. This can help improve climate model by showing how ozone is produced and how it reacts in the atmosphere. Nature Geoscience, September 25 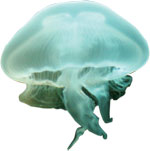 The soft jellyfish might seem no competition for top marine predators. But mind you they are now giving these predators a run for the food. A study has found that the jellyfish rival plankton-eating fish, such as sardines, when it comes to plucking prey out of the water and using the energy from it. The team says in areas where populations of large fish have been sharply reduced by overfishing and habitat destruction, jellyfish have already become the dominant predators. The jellyfish’s proficiency as a predator may seem surprising because while plankton-eating fish have eyes to spot their meals and swim toward them, most jellyfish cannot see and bump into their prey while pulsing through water. Science, September 16 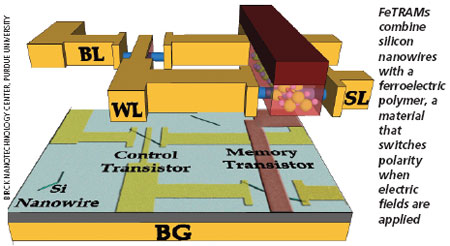 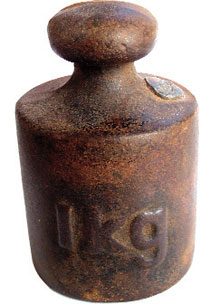 Units of measurement have standards that are followed universally. A kilogram, the unit of mass, is defined by a physical lump of platinum-iridium and the ampere that measures current is defined via the force produced between two wires. Researchers have now found a more precise way for the measurements. They have used fundamental constants of nature to define the units. The kilogram is now to be defined using the Planck constant and the ampere in terms of the electron charge. The validity of relationship between constants and the unit have to be experimentally determined. Tests done using graphene support the changes. New Journal of Physics, September

People with diabetes are known to be at an increased risk of memory loss. Scientists were hopeful that controlling blood sugar might help reduce the risks of diabetes-related mental decline. But now it has been found that an intensive blood glucose control will not do anything to stop the cognitive decline, though those whose blood sugar was controlled more intensely had larger brain volumes. Smaller brain volume is linked to cognitive decline. The Lancet Neurology, September 28

Taking their cue from mother nature, scientists have invented a device that mimics photosynthesis. They replicated the process using a silicon device coated with nickel and cobalt catalysts that when exposed to water and ultraviolet light accelerates a chemical reaction. The hydrogen is then recombined with the oxygen in a fuel cell to produce electricity. The team says the device can generate energy 10 times more efficiently than actual plants. In lab the device operated for 45 hours without a drop in electrical output. Science, September 29

Astrophysics
... Or was he?

Experiment carried out by researchers at the European Organization for Nuclear Research (CERN) showed that neutrinos, subatomic particles, can travel faster than light. This is against Einstein’s special theory of relativity which says nothing can move faster than light. The beam of neutrinos released at cern in Geneva reached infn Gran Sasso laboratory in Italy, 60 nanoseconds before light would have done. If proved right, this would make time travel possible. The researchers say that the results need to be confirmed and independently assessed by more experiments. Presented at a seminar at CERN, September 23 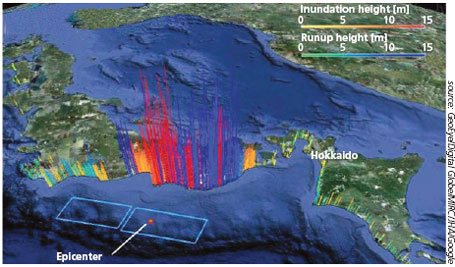 Researchers have for the first time created a detailed map of the tsunami generated by the deadly March 11 earthquake, surveying 5,300 spots along Japan’s coast. They found from about 48 km to 201 km north of Sendai, the narrow bays focused the tsunami waves, generating the largest inundation heights. On the Sendai Plain, the maximum inundation height was 19.5 metres above sea level. The data points out how tsunami characteristics, heights and distance travelled inland varied regionally. Geophysical Researcher Letters, September 27