Occupational exposure to a chemical used in dry-cleaning solutions and to degrease car parts raises the risk of Parkinson’s disease six-fold. Scientists linked Trichloroethylene to the brain disorder after studying 99 sets of twins. One in each pair was a sufferer of the illness, which can cause limb tremors. The US Environmental Protection Agency says the chemical is a carcinogen. Annals of Neurology, November 14 (online) 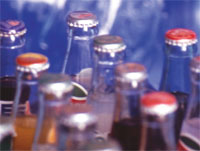 Two fizzy drinks a day can increase a woman’s risk of heart disease and diabetes and expand her waistline, even if she does not pack on the pounds. US scientists have found that middle-aged and older women who drank two or more beverages like carbonated sodas or flavoured waters with added sugar were nearly four times likely to develop high triglycerides (blood fats) when compared with women who drank less than one sugar-sweetened beverage a day. What’s more, women who drank more sodas a day had more belly fat, but not necessarily more weight. Belly fat poses greater health risks than fat in other areas of the body because it lies deep inside and negatively affects blood pressure, cholesterol and insulin production. The same associations were not observed in men. Presented at American Heart Association’s Scientific Sessions, November

Human-generated noise is bad for birds. For the larger species, it is worse. Birds rely on sound to find mates and avoid danger. Manmade cacophany, which is of low frequency, makes it difficult for bigger birds with low-frequency sound to hear each other’s chirps. So they are less likely to build nests in such areas. Larger birds, such as western scrub jays and pinyon jays, are important seed dispersers for trees like pines and oaks. PLoS ONE, November 9 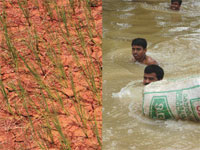 Long-term air pollution can exacerbate extreme weather conditions by affecting cloud formation. Based on a 10-year data of atmospheric measurements, a study says aerosols—soot and dust—affect cloud height and thickness, reducing precipitation in dry areas or seasons while increasing rain, snowfall and intensity of storms in wet areas or seasons. Nature Geoscience November 13 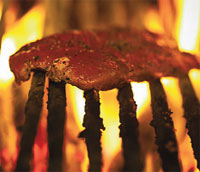 Dieticians got it all wrong. Cooked meat provides more energy than raw meat, concludes a research. Harvard University scientists fed two groups of mice either meat or sweet potatoes prepared in four ways: raw and whole, raw and pounded, cooked and whole, and cooked and pounded. Researchers tracked the changes in the body mass of the mice for 40 days. The results showed that cooked foods delivered more energy than their raw versions. The study also reaffirms that cooking played a vital role in human evolution. Two million years ago, humans suddenly evolved to have bigger brains and stronger bodies. It was in this period that they learned how to control fire and started to cook, say the researchers at the University of Oklahoma Health Sciences Center. PNAS, November 7

For the first time, scientists have explained how pathogens alter their hosts to lure the vector, just like malarial parasite that makes humans more attractive to mosquitoes. The team focused on a pathogen strain, Aster Yellows Witches’ Broom, that can cause deformity in plants. It is transmitted by sap-sucking leafhoppers. The researchers sequenced the genome of the strain and identified proteins that influence the host-vector relationship. They discovered that a particular protein reduces the host plant’s levels of defense hormone against the leafhopper, allowing the insect to produce more eggs on the plant and lead to the spread of the disease. PNAS, November 7 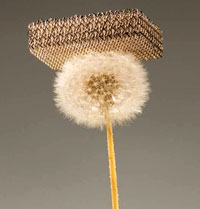 Scientists have created the world’s lightest material, a latticework made almost entirely of air. At 0.9 milligrams per cubic centimetre, the material is about one hundred times lighter than thermocol. Its potential uses include next-generation batteries and shock absorbers and products that dampen sound. The material is made of interconnected nickel-phosphorous hollow tubes with a wall thickness of 100 nanometres—about 1,000 times thinner than a human hair. When squashed to half its height, the material rebounds 98 per cent of the way back.The material draws parallels with the Eiffel Tower, which is incredibly light and weight-efficient, thanks to its hierarchical lattice design. Science, November 18

After analysing a decade of satellite data on sea surface temperature, researchers have developed a model that can predict fires in the Amazon months in advance. The method uses temperature shifts as small as a quarter of a degree Celsius in the Atlantic, and one degree in the Pacific. In 2010, the scientists used the model for the first time to predict intensity of wildfires. The team saw warmer ocean temperatures and predicted a spike in wildfires, which later occurred. They also accurately forecast drought conditions in the Amazon three to six months later. Science, November 11

Diabetics may be saved from painful skin pricks. Researchers at University of Michigan in the US have created a chemical sensor that measures blood sugar levels using tears, not blood. The study, which used rabbits as surrogates for humans, found glucose levels in tears correlated to glucose levels in the blood. WHO says 346 million people worldwide are diabetics. Analytical Chemistry, November

Almost 30 per cent of amphibian species are at risk of extinction. The causes: a complex combination of climate change, shift in land use pattern and spread of killer fungal disease chytridiomycosis. Frogs are the worst hit. Researchers say two-thirds of the areas with the richest frog diversity will be affected by 2080. Regions with the highest projected impact of land-use and climate change coincide, but there is little spatial overlap with regions highly threatened by the fungal disease, add the researchers. Nature, November 16 (online) 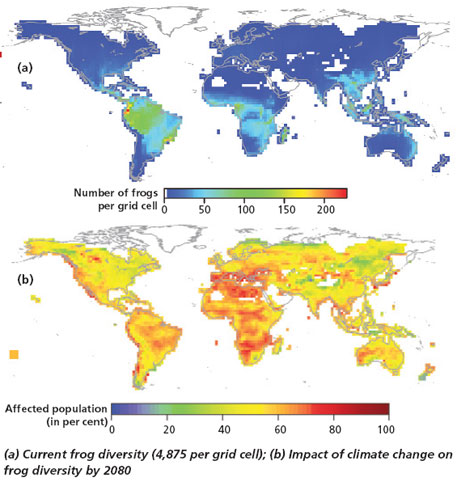