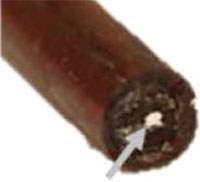 Here is a wire you can stretch, bend or cut and it would still work. Scientists have created the self-healing, elastic wire using liquid metal and a polymer. Small tunnels are bored in polymer sheath and are filled with a liquid alloy of indium and gallium, forming a liquid metal wire inside the stretchable sheath.

When the wire is cut, the liquid metal oxidizes, hardens and forms a film that prevents the metal from leaking. When the severed ends are pressed back together, the polymer faces meld with one another on a molecular level and the metal film breaks, fusing the wires together. It can be used in complex circuits and then the circuit can be altered using just a pair of scissors. Advanced Materials, January 25

Dissolving crushed rocks in oceans to make the water absorb more carbon dioxide has been touted as a quick fix to climate crisis. But it might not work. If three billion tonnes of olivine, a rock high in magnesium and silica, are deposited into the seas each year it would compensate for just nine per cent of the present day carbon emissions.

Further, 30 per cent of the greenhouse gas so fixed would return to the atmosphere through processes used for grinding the rock down to one micrometer so that it would dissolve. Environmental Research Letters, January 21

Neon, a gas we use for lighting, also has a key role in generating powerful stellar explosions called novae. These explosions occur when a small star dies. Astrophysicists have now analysed the structure of radioactive neon produced by novae.

The study shows current assumptions about key nuclear properties of these explosions are incorrect and provides better knowledge of the nuclear reaction pathway. This can allow scientists interpret data from gamma ray observing satellites better and determine what elements are synthesised in a nova. Physical Review Letters, January 18 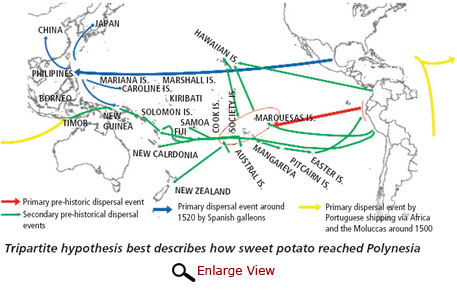 How sweet potato reached Polynesia and the surrounding Pacific islands from its native South America has long been a mystery. By analysing genetic data from modern samples of the plant and older herbarium specimens, researchers have concluded that the “tripartite hypothesis”, developed in the 1970s, best explains the migration. The hypothesis argues that sweet potato was introduced to the region three times: first through premodern contact between Polynesia and South America, then by Spanish traders sailing west from Mexico, and Portuguese traders coming east from the Caribbean. The Spanish and Portuguese varieties ended up in the western Pacific, while the South American variety dominated in the east. This explains the genetic differences the researchers saw. PNAS, January 23

Ecology
One queen or many?

With their painful sting and a highly invasive tendency, red fire ants are a major pest in warm climates. Some colonies of these ants are home to two or more queens while others do not tolerate more than one. It has now been found that this happens due to the presence of a “social chromosome” with one of the two variants of a “supergene” that has over 600 genes.

If the worker ants in a colony carry exclusively the dominant variant of the supergene, they will accept a single queen. But a colony that includes worker fire ants with the recessive variant will accept multiple heterozygous queens. The discovery can help develop new pesticides that could alter the supergenes and induce social anarchy within the ant colonies. Nature, January 25 (online) 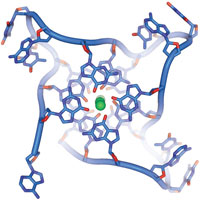 Exactly 60 years after double-helix DNA was discovered as the chemical basis of life, it has been found that quadruple-helix or four-stranded DNA also exists in humans. Such structures had previously been created in the lab but it was thought they don’t exist in nature.

Known as G-quadruplex, they are found in DNA regions rich in guanine. These play an important role in DNA replication, a process pivotal for cell division. This indicates that quadruplexes are more likely to occur in cancer cells since these cells are in a constant state of rapid division.

Rising meat consumption in the last five decades has caused a 38 per cent increase in the world’s per capita “phosphorus footprint”. This is because it takes many kilogrammes of feed, grown using phosphate fertilizers, to breed a cattle for its meat. Phosphorus is being mined for these fertilisers at a much faster rate than geological cycles can replenish it. Inclusion of diet change strategies in phosphorus management studies could bring down the demand for mined phosphorus. Environmental Research Letters, December 19

Salmon stocks are known to vary over years and decades but such variation cycles can also last for centuries. Analysis of a nitrogen isotope that salmons accumulate in sea and leave behind in lake sediments when they die has been used to study fluctuations in their stocks in Alaska. It was seen that in 16 major watersheds salmon run declined around 1900 when commercial fisheries developed.

However, it was found that salmon runs had varied just as dramatically a few more times in the last 500 years, with variation cycles of up to 200 years. This shows fisheries alone are not to be blamed for stock fluctuations and natural factors also play a role. PNAS, January 29

As climate change makes the earth warmer, soil microbes would start releasing more carbon dioxide into the air, raising the temperature further. These microbes break down organic matter, like dead plants, and in the process emit 10 times more heat-trapping gases than humans do.

The amount of these gases is kept in check by plants. But human activities are now upsetting this balance, triggering a positive feedback loop that would increase microbial activity. The good news is that the effect would diminish after 18 years as microbes would adapt to high temperatures. Nature Climate Change, January 20

The cold, bluish white glow of light emitting diodes, popularly known as LEDs, makes most people dislike them as indoor lights. This has restricted the use of these energy-efficient and durable bulbs in flashlights and automotive lamps. A new lighting-emitting material, or phosphor, has now been developed that can give LEDs a warm white glow.

The process involves heating very small quantities of europium oxide with aluminum oxide, barium oxide and graphite powders at 1,450°C. This makes them vapourise and deposit as a yellow phosphorescent material. This material can be used to produce world’s first single-phosphor LED that emits a warm white light. Light: Science & Applications, January 18