The break could happen anytime this year or early next year, say experts

A huge iceberg is expected to form off the coast of Antarctica as an ice shelf is in the process of cracking, NASA has said. The ice shelf is twice the size of New York City.

The Brunt Ice Shelf juts out into the Weddell Sea south of South America’s Cape Horn. There are two cracks that will eventually lead to the break off.

In an image dated January 23 that NASA has posted on its website, the so-called Halloween crack is seen. It first appeared in late October 2016 and continues to grow eastward from an area known as the McDonald Ice Rumples.

“The more immediate concern is the rift visible in the center of the image. Previously stable for about 35 years, this crack recently started accelerating northward as fast as 4 kilometers per year,” the NASA statement accompanying the image notes.

“The near-term future of the Brunt Ice Shelf likely depends on where the existing rifts merge relative to the McDonald Ice Rumples,” the NASA statement quotes  Joe MacGregor, a glaciologist at the US Space Agency’s Goddard Space Flight Center, as saying. “If they merge upstream (south) of the McDonald Ice Rumples, then it is possible that the ice shelf will be destabilized.”

According to the statement, the iceberg that could be formed due to the merging of the rifts, would be of an area of 1709.39 square kilometres (sq km). That would be more than twice the size of New York City, which measures about 782.176 sq km.

The iceberg is very big by Antarctic or polar standards, says NASA. “But it may be the largest berg to break from the Brunt Ice Shelf since observations began in 1915,” it notes.

This is not the first time such an incident is happening. The vast Larsen Ice shelf on the east coast of the Antarctic Peninsula has been breaking in a series of so-called ‘calvings’. Larsen A and Larsen B calved in 1995 and 2002. In February 2017, Down To Earth had reported that the ice shelf, Larsen C, was going to break away, reducing Antarctica to its smallest ever size. It broke away in July 2017 to form an iceberg known as A-68.

Thamban Meloth, who is group director (polar science) at the National Centre for Polar and Ocean Research in Vasco da Gama, Goa, explained the basic concepts of Antarctic glaciology.

“There are three types of ice found in Antarctica,” he told Down To Earth. “First, there is the continental ice, which is ice sitting on the continent’s landmass. Antarctica is 4.5 times the size of India. It has similar geographical features like any other continent including land, mountains and valleys, all of which are covered with ice. The continental ice shelf is 4.5 km thick in some places,” he adds. 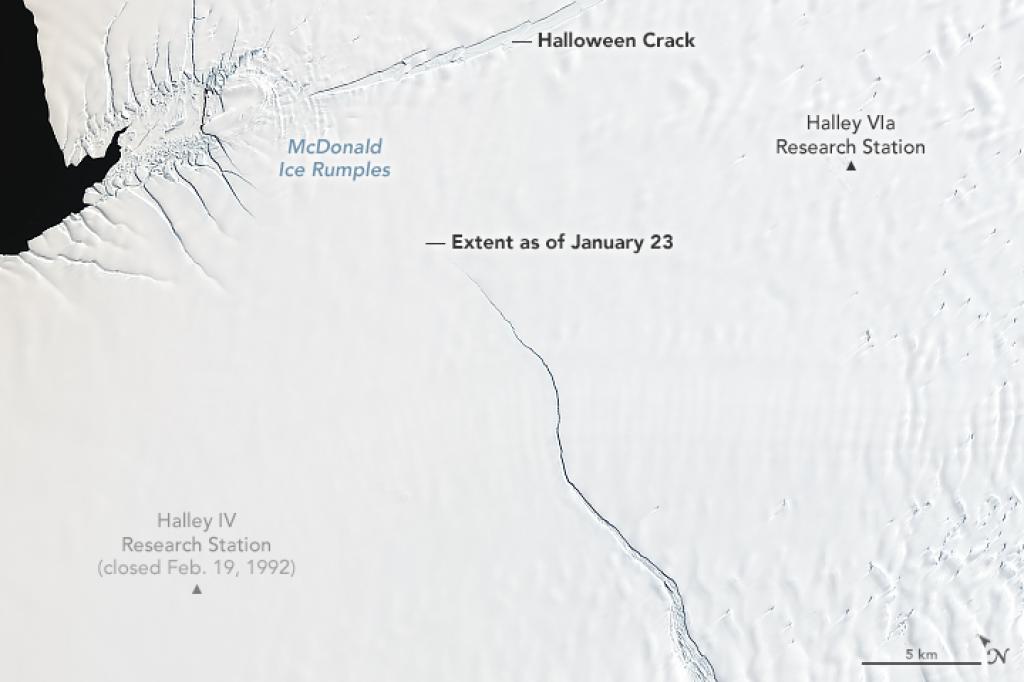 The second type of Antarctic ice is the ice shelf. It is a thick suspended platform of ice that forms where a glacier or ice sheet flows down to a coastline and onto the ocean surface. “Though Antactica has lesser glaciers than the Arctic, it still has a number of ice shelves, most of which are 100 metres to 500 metres thick,” Meloth informs.

The third type of ice is sea ice. Meloth says, “It is ice that forms during winter time due to the freezing of sea water. It is 1 metre thick and thaws in the summer.”

Icebergs form due to a process called calving. It is the breaking of ice chunks from the edge of a glacier (ice shelf). “This happens due to the weight of the ice shelf and the force of gravity,” says Meloth.

Calving is a normal part of the life cycle of ice shelves, says NASA, but the recent changes are unfamiliar in this area. “Global warming also does play a role in the disintegration of ice shelves. As the sea gets warmer, warmer ice erodes the bottom. This causes what is known as basal melt,” Meloth says.

There are also concerns for the safety of researchers at the British Antarctic Survey’s Halley Station, which is located on the Brunt Ice Shelf.

As for the long-term consequences, Meloth notes that the calving process does affect the continental ice sheet in the long run. “This iceberg will break away either this year or early next year, I reckon.”