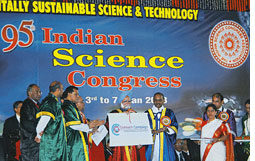 the science congress which ended on January 7 failed to create an impact. Held in Visakhapatnam, the key theme of the five-day conference organized by the Indian Science Congress Association was a 'Knowledge-based society using Environmentally Sustainable Science and Technology.

Not only did the event fail to address the key issues, many of the research papers presented had little substance. "The papers showed a lack of vision on the part of the selectors," said D L Sastry of department of physics at Andhra University.

Issues such as climate change were almost sidelined. Only five papers dealt with the issue. Addressing a session on the issue, chairman of the National Farmers' Commission, M S Swaminathan, said rice being an adaptive crop could withstand the temperature changes from climate change.

Significant themes such as adaption and mitigation techniques on climate change, found no takers. While there were several papers on bioremediation techniques and ecological conservation, solid waste management techniques attracted few researchers. Only the environmental and agricultural sciences sections found a significant number of scientists.

Among the few noteworthy papers were studies by Tarak Nath Chowdhury, a teacher from West Bengal, and Aroh Srivastava, a chemical engineering student at the ies ips Academy, Indore. While Chowdhury's paper on electronic lpg optimum burning system talked about saving more than 30 per cent lpg, Srivastava's paper elaborated on making biodiesel from waste vegetable oil.

Some scientists suggested that individual sections had unbalanced emphases and did not address issues in a "holistic manner". For example, "We ignore aspects necessary for food security. Everybody talks about organics. But there is no clear strategy developed for organic agriculture. The congress too has failed to deal with this," said G Manjunath, the young scientist awardee in the agriculture section.

"We must look into why the congress is not able to attract the best brains in the country and take steps to improve the situation," said Swaminathan. Many top scientists were absent from the meet. "Eminent scientists need to regularly attend the congress to encourage young scientists," said Sastry.