Food supplies may drop over 20% in 70 poor countries with 1.3 bln people, the study estimated

'Baker Shot', part of Operation Crossroads, a nuclear test by the United States at Bikini Atoll in 1946. Source: Wikipedia

Unprecedented food shortage and global famine lasting more than a decade can be the fallout of an India-Pakistan war, according to a recent study published in journal Proceedings of the National Academy of Sciences (PNAS).

The study examined potential environmental and societal consequences if the two South Asian neighbours were to start even a limited nuclear war.

Territorial disputes over the Kashmir region between India and Pakistan provide an increasingly high level of instability and escalatory retaliation could result in the use of nuclear weapons.

The firestorms would launch over five million tonnes of soot toward the stratosphere, the study noted. There, it would spread globally, absorbing sunlight and lowering global mean temperatures by about 1.8 degrees Celsius, and precipitation by 8 per cent, for at least five years.

This, in turn, would adversely affect production of the world’s four main cereal crops — maize, wheat, soybeans and rice — causing it to plummet by 11 per cent, according to scientists. The tapering effects can last for another five to 10 years. 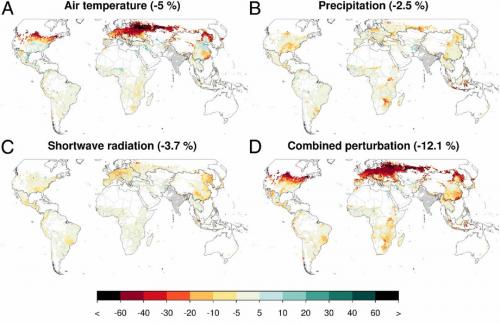 According to the study, crop production will be badly hit in the northern regions of the United States, Canada, Europe, Russia and China, popularly called the breadbasket areas.

However, the southern regions will suffer more. That is because many developed nations in the north produce huge surpluses, which are largely exported to nations in the south.

The study estimated that some 70 largely poor countries with a cumulative population of 1.3 billion will see food supplies drop by more than 20 per cent.

Developed nations could be prompted to impose export bans to protect their own populations, the study noted. This would mean that nations like Somalia, Rwanda, Syria and Yemen — which are already struggling with malnutrition — could witness a drastic slump in food availability.

“Even this regional, limited war would have devastating indirect implications worldwide. It would exceed the largest famine in documented history,” Columbia University Earth Institute quoted Jonas Jägermeyr, lead author of the study, as saying.