Race to a new drive 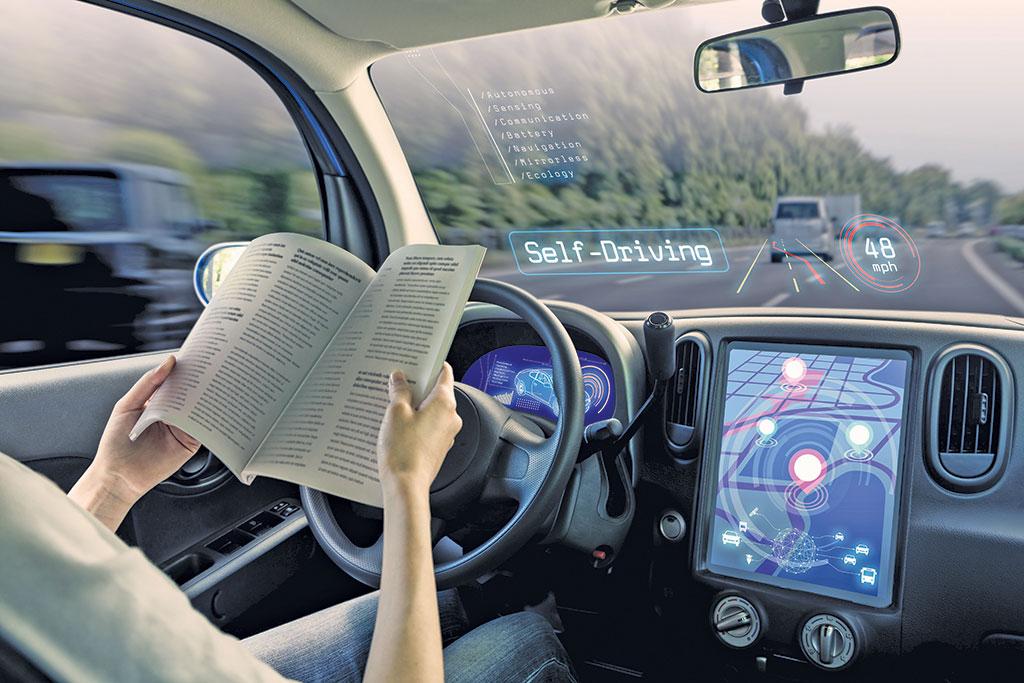 An AV uses an artificial intelligence system which receives data from the surroundings in real time through onboard instruments. This data is then analysed by an onboard computer to take instant driving decisions

On March 19, 2018, an autonomous Uber cab killed a woman walking with her bicycle in Tempe, Arizona, USA. Local police say the car did not slow down even when the woman was standing right ahead. Though an operator was inside the car, no case has been registered against him. Uber has put off further trials. Three accidents involving autonomous vehicles (AV) have taken place in USA in the last two years. In January this year, an AV of Tesla in California was not able to recognise a stationary fire truck when the vehicle in front suddenly changed lanes. The car rammed into the fire truck but the driver was safe. In February, 2016, one person lost his life in an accident as his semi-autonomous car could not differentiate between “the white side of a tractor trailer against a brightly lit sky” in Florida.

AVs may be hogging headlines for all the wrong reasons, but they are changing the face of transportation systems. Using the artificial intelligence system, AVs are making inroads in various parts of the world. Tesla has sold more than 120,000 cars with built-in autonomous features in the US. Recently, Uber bought 24,000 autonomous SUVs from Volvo for its operations in the US. The Swedish government has launched a large-scale experiment to understand the interaction of AVs with humans. A similar project is underway in the UK. In Germany, the road and transport company, Deutshe Bahn, along with the technology company, Easymile, has started a fully autonomous bus service in Bavaria. The bus can carry six passengers at a time and travels for around 700 m. It has been envisioned as part of a larger integrated transport system.

Google’s Waymo is offering free rides to people in Arizona, USA, to try out its newly-launched mass produced self-driving mini-van, the Chrysler Pacifica Hybrid. The mini-van is being used as a robotaxi service. Waymo has also tied up with Chrysler to build fully autonomous cars. Automobile manufacturers like Ford, General Motors (GM) and Toyota are planning to upgrade their current fleet of cars with autonomous technologies. GM is currently leading the competition with the acquisition of auto-nomous technology starts-ups like Cruise Automation and Lyft.

In India, companies like Tata, Mahindra and Infosys have launched autonomous technology projects which are in various levels of development. There are also a number of Indian technology start-ups that are working on cheaper modules of AV technologies. For instance, Flux Auto, Bengaluru, is building modules that perform specific autonomous functions, while Hi-tech Robotic Systemz, Gurugram, has built India’s first fully AV, Novus Drive (see ‘The road to fully autonomous vehicles’).

A large number of global automobile companies believe that mobility in the future will be driverless. A study by RethinkX, an independent think tank based in USA , says that 95 per cent of all the travel by US citizens by 2030 will be through AVs, which would mostly be provided as a service by companies like Uber. In a study published in 2017, tech giant Intel predicted that a new economy will bloom “around the time saved by people in not driving their own vehicles”. It pegs what it calls the “passenger economy” at a massive US $7 trillion, which is three times the size of India’s GDP. Audit firm KPMG says that car ownership will fall 70 per cent by 2050 (see ‘Movement message’).

An AV uses an artificial intelligence system which receives data from the surroundings in real time through onboard instruments. There are two types of technologies—one that uses the Light Detection and Ranging (LIDAR) and others which don’t. LIDAR uses light pulses to generate detailed three dimensional images of the environment around the vehicle. Cameras are used to see markings on the roads while short range radar technology is used to calculate distances from objects. This data is then analysed by an on-board computer to take real time decisions to manoeuvre through busy city streets. Waymo is an example of LIDAR based-technology. Tesla cars do not use the fine detailing of LIDAR but its vehicles provide full semi-autonomous functions.

Autonomous technologies are at different levels of development and are graded on a scale of 1 to 5, according to USA’s Society of Automotive Engineers. At each of the levels, the degree of the autonomous nature of the vehicle increases. At level 1, the technology provides for a specific assistance such as steering and acceleration, while the rest of the functions are controlled by the driver. At level 2, the driver physically disengages from driving, while the onboard computer takes over with cruise control and lane centring, but the driver still needs to remain alert in order to take over in case of an emergency.

At level 3, all functions, even regarding safety, are taken over by technology. The driver’s role is limited to just occasional monitoring. At level 4, the car is fully auto-nomous for an entire trip, but does not cover all expected driving conditions. The driver is not required. A level 5 AV would equal the performance of a human driver. 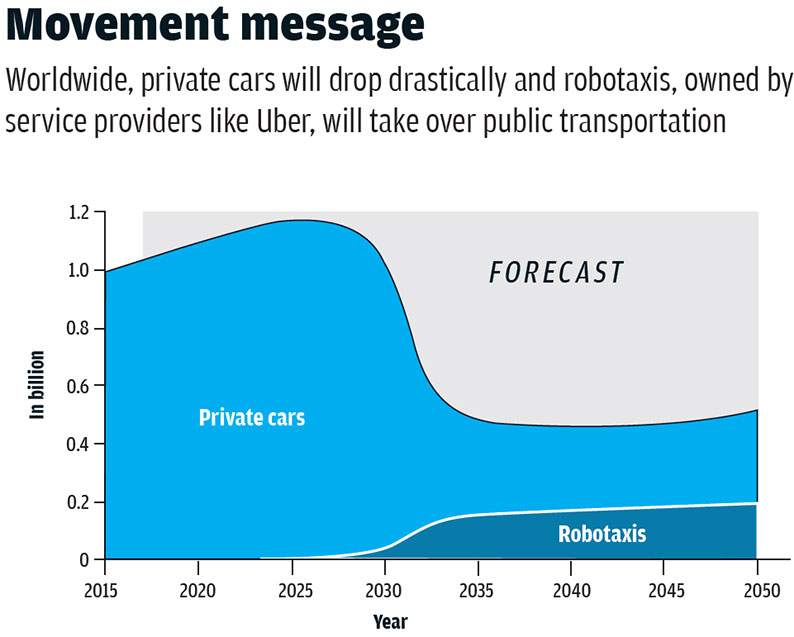 But there are several major concerns around using artificial intelligence in transportation. At levels 4 & 5, AVs would leave no option for a human to takeover even in an emergency, which brings forth a host of issues regarding the safety of these cars. The problem also lies with the decision-making capability of the AV in unpredictable situations. For instance, experts have raised doubts about the inability of AVs to take moral decisions in a situation where it would need to decide whether to save the passenger or someone on the road. Humans take quick decisions on instinct, while codes will have to be written for AVs.

There are also legal hurdles and questions of accountability. On one hand, the state of California recently allowed AVs to operate without drivers to sit inside in case of emergencies. And in the other, Germany has enacted a law that makes it mandatory for drivers to be present at all times in an AV to take over in the case of an emergency. The UK is working on a law to regulate AVs which it expects will be out by 2021. USA is also working on its Safely Ensuring Lives Future Deployment and Research in Vehicle Evolution law or simply SELF DRIVE. James M Anderson, a behavioural scientist at US-based RAND Corporation, says: “The common law system has a long history of accommodating new technologies, but there are some statutory provisions that might need to change.”

But even while formulating laws, there are several grey areas. Take for instance the Uber cab that killed the woman in Arizona. Robert Rabin, a professor at the Stanford Law School, California, says: “Under conventional tort law principles, if the safety driver failed to exercise reasonable care in avoiding the accident, Uber would be responsible for the driver’s negligence. If the automated features of the AV failed to note the presence of the victim, the manufacturer of the vehicle, as well as Uber, could be held responsible under the product liability principles. If the victim was walking in the road-way and her presence was obscured by darkness at the late hour, she might be found partially at fault.”

Even as countries redraft transportation laws to account for AVs, simple enhancements of technology can ward off possible deaths. Instruments like noises or light flashes can be used to warn people and other vehicles around the AV. Perhaps to begin with, different degrees of autonomy could be allowed in different sections of a city based on how difficult it would be for the AV to navigate through them. “I think companies recognise that driving is a social act and that interactions among drivers and pedestrians vary widely by locality even within a single country, but I’m not certain how they are going to accommodate these differences,” says Anderson.

AVs have performed well in controlled environments where routes are fixed and uncertainty is less. But in the real world, an AV will have to wade through complicated traffic congestions, read road signs with graffiti on them and respond to non-verbal gestures used by drivers and traffic personnel. This would need technology to be as robust as a human being! “Society may be less tolerant of mistakes made by machines than of mistakes made by people. But if we can accept that early self-driving cars will make some mistakes—but fewer than human drivers—developers can use early deployment to improve self-driving technology,” says David Groves, co-director of RAND’s Water and Climate Resilience Center.

AVs may perhaps work in a scenario where human-driven vehicles are banned. Then all AVs would be connected to each other and be able to communicate much more efficiently than they can do with human drivers. But then what would happen to the jobs of human drivers. While some could be employed as tele-operators remotely monitoring large fleets of auto-nomous vehicles, the majority would be out of jobs. This has always been a major concern with the introduction of artificial intelligence into any sector of the economy.

On the other hand, do people feel safe inside an AV? According to a study by the American Automobile Association, 63 per cent of drivers felt afraid to ride in a fully self-driving vehicle in 2017, down from 78 per cent a year earlier. This may mean an increasing acceptance of the idea of a self-driving car, but if accidents continue unabated, the scenario could reverse easily. If forecasts prove correct and AVs takeover our transportation in the future, it would not only mean a great advance in technology but also a reimagining of the way we move from one place to another.