Space Race 2.0: ISRO now stands at the cusp of next change 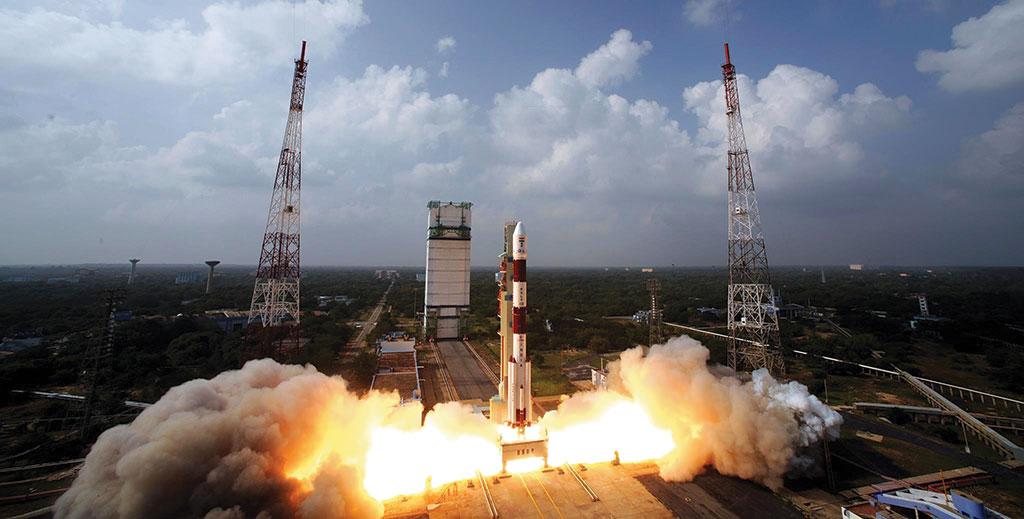 PSLV, which was used to launch critical missions like Chandrayaan-1 and the Mars Orbiter Mission, has emerged as ISRO’s workhorse rocket in the past 25 years (Photo courtesy. ISRO)

When the much-awaited second Indian mission to the moon, Chandrayaan-2, is launched in a few months from now, it will carry a lander that will soft land on the lunar surface at a predetermined location and deploy a rover. The mission will not only be a technological milestone in India’s journey of space exploration, but will also be a humble tribute by the Indian Space Research Organisation (ISRO) to its founder Vikram Sarabhai as the lander has been named after him. In a way, missions like Chandrayaan-2 go beyond fulfilling the dreams of Sarabhai, who initiated India into the space age on November, 21, 1963, with the launch of the first sounding rocket from the fishing village of Thumba in Kerala.

The bandwidth India has developed in the space sector in the past half a century is impressive—different types of satellites (ranging from Earth observation to strategic surveillance), rockets capable of placing satellites in different types of orbits, space telescope, deep space and planetary missions, recently even space warfare (in collaboration with the defence research agency) and finally the human space flight in a couple of years from now. Every mission is a technological challenge and has been achieved with a very high degree of self-reliance and capability developed under stiff international technology embargoes.

In fact, the initial period of space development in the 1960s and early 1970s was one of international cooperation when both the superpowers helped India generously. The scenario changed dramatically after the Peaceful Nuclear Explosion in 1974 and subsequently after the end of the cold war. Over the next three decades, ISRO developed capability in building launch vehicles (like Polar Satellite Launch Vehicle, or PSLV), fabricating communication and remote sensing satellites (like INSAT and IRS), and developing ground support facilities and applications.

With such capability in the 2000s, it was ISRO’s turn to cooperate with others by launching foreign satellites (including those from the US and Europe) on commercial basis and even carrying scientific payload of NASA on-board Chandra-yaan-1 in 2008. The highlight of this mission was the evidence of water it found in the exosphere, surface and sub-surface of the moon. The orbiter of Chandrayaan-2 mission will carry a wider range spectrometer, which scientists expect, can yield “the firmest conclusions on the distribution of water on the Moon’s surface”. By achieving successful insertion of its orbiter into the Martian orbit in the very first attempt in September 2014, ISRO firmly established its technological prowess and attracted attention for being cost effective.

Having traversed this far in the space sector, ISRO now stands at the cusp of next change which will involve sending humans into space, expanding commercial operations and responding to the changing dynamics of space business globally.

THE NEXT GIANT LEAP for ISRO will be the human space flight scheduled for late 2021 or early 2022. This adds a new dimension to the space agency whose activities till now have centred around engineering payloads, such as satellites, orbiters and space telescope. The payload in case of the human space flight will be humans, which means preparing the rocket and payload modules conducive for human life. This is a major life sciences challenge. Therefore, in January this year, ISRO established a new arm called Human Space Flight Centre (HSFC), making life sciences a new vertical in addition to its existing three–launch vehicles, space assets (satellites) and applications.

The immediate task of HSFC will be to handle the process of astronaut selection, develop life support systems for humans and prepare for post-flight rehabilitation of astronauts. All of it may not be achievable for the 2021 flight of Gagan-yaan, India's proposed crewed spacecraft, and HSFC may have to depend on facilities abroad for core part of astronaut training. But, as ISRO chief K Sivan has pointed out, life sciences will be developed as full-fledged activity since “we are not going to stop with launching humans into space. We are going to continue this programme in terms of a space station and sending a human to the moon”.

This means HSFC will act as nodal point for all activities related to humans in space in the future, even though a space station or a crewed mission to the moon are not on the drawing board yet. Still, Sivan’s statement has made it clear that that’s where ISRO wants to be. Incidentally, China has already begun building its own space station and plans human flight to the moon, after having a string of successful human space flights.

THE PSLV, which was used to launch critical missions like Chandrayaan-1, Mars Orbiter Mission as well as space telescope AstroSat, has emerged as ISRO’s workhorse rocket in the past 25 years. Since September 1993, it has had a total of 47 flights with just two unsuccessful ones. Very few rockets in this class have such a record. That’s why PSLV has been attracting foreign customers in droves, particularly in the last few years. The popularity of the rocket becomes clear from the fact that ISRO is now scheduling some PSLV missions exclusively to launch foreign satellites. Till date, PSLV has launched 297 satellites of international customers, compared to 46 national satellites and 10 built by students from Indian universities.

The most recent flight of PSLV, which was on April 2, 2019, propelled into space 28 satellites that came from Lithuania, Spain, Switzerland and the US. The main payload was India’s military satellite EMISAT intended for electromagnetic spectrum measurement. This launch of PSLV was also indicative of the technological manoeuvrability the space agency has achieved with this vehicle. The mission was used to launch satellites in two different locations in the sun-synchronous polar orbit—at 748 km and 504 km—as well as conduct certain orbital experiments with payloads in a lower circular orbit at 485 km. This means a single flight of rocket could be used for achieving satellite missions in multiple locations. From a commercial launcher perspective, this is a sign of maturity.

The frequency of PSLV missions has gone up with the second launch pad becoming operational at the Satish Dhawan Space Station in Sriharikota. The agency is planning a third one for the human space flight. All this has greatly enhanced capability for commercial launches. From just a couple of launches in a year earlier, now there are five to six launches. The agency wants to take this number to 12. Higher launch frequency means speedier production of rockets. Most of the sub-assemblies are currently built by private companies but the integration and final assembly is done by ISRO. If the production of PSLV has to go up, end-to-end integration will have to be out-sourced to industry. In future, a consortium of industries may be entrusted this work, so that ready-to-launch PSLV could be produced in private sector and ISRO can launch the same from Sriharikota.

GLOBALLY, THERE IS A QUIET SHIFT taking place in the satellite business. With changes in electronics, materials and communication technologies, it is becoming possible to develop compact payloads that can be fitted into smaller satellites without compromising on mission goals. This means one can have a constellation of smaller satellites in low Earth orbits for purposes like remote sensing and surveillance rather than a large satellite in a single orbital location. A large number of satellites of foreign customers launched by ISRO in recent years belong to constellations being developed by small companies. It costs much less to develop, fabricate, launch and manage such small satellites.

ISRO’s strategy is twofold—market PSLV for launch of such satellites and develop its own satellites in this category. For smaller satellites (100 kg), it has developed a platform called Indian Mini Satellite-1 (IMS-1) and for 400 kg class satellites it has IMS-2. Micro and nano satellites (below 100 kg) are also gaining popularity. For launching smaller satellites, ISRO has begun work on a new launch vehicle called Small Satellite Launch Vehicle (SSLV) which will be so quick to assemble and integrate that one could launch satellites on demand, may be in a week or 10 days as against several months it takes to integrate PSLV. A new launch pad, perhaps at a location other than Sriharikota, is being considered exclusively for SSLV.

In any case, ISRO’s hands are full with new missions—deep space, scientific, human flight, commercial and strategic. However, to develop an aerospace industry with private investments and startups, India needs to develop a clear blueprint and also put in place a space regulatory system.