Why zebra refused to be saddled with domesticity

They look like stripey horses – so why don't we ride them? 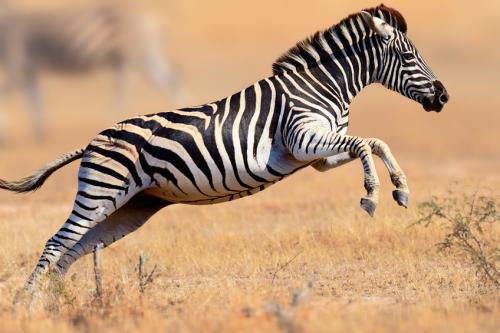 In many ways, zebra appear very like horses (or ponies, given their size). Yet underlying differences in behaviour have meant that while horses and donkeys have been successfully domesticated, the zebra remains predominantly wild. So how did the zebra avoid the load bearing, farm working, fence jumping fate of its cousins? And which animal ended up with the better deal?

Because of their obvious similarity to horses – and for novelty value – attempts have been made by humans to ride and race zebra. The 2005 movie, Racing Stripes, was the story of a young zebra who wanted to compete in horse races – although the filmmakers were forced to use a horse stand-in for some scenes (the tail gives it away).

The manes and tails of zebra are in fact more similar to those of asses (donkeys) and reflect the evolutionary history of the genus Equus. Although horses, assess and zebra all evolved from a common ancestor (Hyracotherium) which lived in Europe and North America around 55m years ago, divergence meant that the zebra and donkey are more closely related to each other than either is to the horse.

The North American equids (members of the horse family) disappeared about 8-10,000 years ago, and in Europe and Asia, Palaeolithic man extensively hunted the herds of wild horses on the open plains. A combination of climatic change, forestation and human predation pushed the animals eastwards to the semi-deserts of central Asia.

The wild ancestor of today’s domestic horses (Equus ferus) was first domesticated in the western Eurasian Steppe, an area where the earliest archaeological evidence for domesticated horses was found. Recent research also shows the domestic herds were repeatedly restocked with wild horses as they spread across Eurasia.

Horses were initially kept as a food animal, but their full potential as a means of transport, communication and warfare resulted in them being of increasing importance in the development of human civilisation. In Mongolia, the land of the horse, the legendary 13th-century warlord Genghis Khan used the animal to establish a domain that extended from Hungary to Korea, and from Siberia to Tibet: an Asian empire won on horseback.

So, if horses were so important to human civilisation, why not the zebra? Humans originated in Africa so it seems strange that they missed exploiting such a potentially useful animal living on the same continent.

Unlike the Equids of Eurasia, however, the zebra population of Africa was relatively secure and particularly well adapted to its environment. All equids are herbivorous prey species with a well developed “flight or fight” response. But to survive in an environment where there is an abundance of large predators including lions, cheetahs and hyenas, the zebra evolved into a particularly alert, responsive animal that flees in the face of danger but also possesses a powerful response if captured.

The kick of a zebra can break a lion’s jaw. They can be savage biters and possess a “ducking” reflex that helps them avoid being caught by lasso. Familiarity with human hunter gatherers may also have fostered a strong avoidance response in the zebra.

All of this means that zebra are not really “people friendly” and as a species they do not fit the criteria for domestication. According to the English explorer and polymath Francis Galton (a relative of Charles Darwin), these requirements include displaying a desire for comfort, being easy to tend, being useful and showing a fondness for man.

Galton uses the zebra as an example of an unmanageable species, stating that the Dutch Boers repeatedly tried to break zebra to harness. Although they had some success, the wild, mulish nature of the animals would frequently break out and thwart their efforts.

Although it appears possible to tame individual zebra, this species was not a good candidate for domestication. In addition to the intractable nature of the zebra and its strong survival instinct, the fact that this species is “lion fodder” may also have made them appear less attractive “partners” to early humans.

Domestication and selective breeding will undoubtedly have changed both the physical and behavioural characteristics of the horse, which during the early stages would probably have been smaller, wilder and more similar to the zebra than today’s horse.

And while horses may work harder, live in more urbanised environments and do the bidding of their owners, they also lead safer, more comfortable lives. Domestication saved the horse from extinction. In fact, as a survival strategy, domestication has certainly worked for the global horse population, which numbers 60m.

By contrast, zebra numbers are probably now fewer than 800,000, with humans posing the greatest threat to their survival. Faced with these facts, which would you rather be?