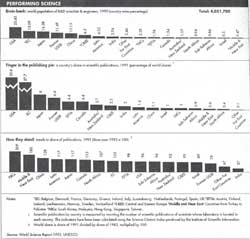 IT IS extremely difficult to measure the scientific performance of a nation, both statistically and in terms of effect. But the few indicators that do exist clearly indicate that developing countries are not performing very well. And a giant like India is performing particularly badly.

India also does very badly in the distribution of researchers in the developing world. While NICs have 2 per cent R&D engineers and scientists per 1,000 people, Latin America 0.5, China 0.4 and North Africa 0.3, India has a microscopic 0.1.

NICs have improved considerably since 1983 in terms of their share in the world's publications. So have West Asia, China, Latin America and North Africa. But the share of Sub-Saharan Africa and the region's non-NIC countries dropped considerably. India's share between 1983 and 1991 literally halved.